Paul Ryan Runs from his own Medicare Plan, Worried about Challenge from Rob Zerban!!?

Rep. Paul Ryan appears to be vulnerable in 2012, and he's showing it. His Democratic challenger Rob Zerban started early and campaigned often. And while Ryan has turned off constituents with fewer and fewer town halls and unwavering support of ending to Medicare, Zerban has moved within 6 points of overtaking Ryan. Get a load of this report from The Hill earlier today: 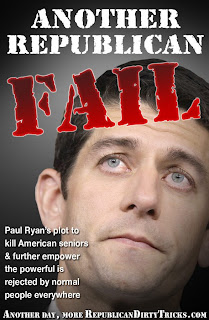 A prominent Democratic pollster is making the case that the party should invest in a challenge to Rep. Paul Ryan, the architect of the conservative House budget plan. Pollster Paul Maslin's survey of 405 likely voters "shows that challenger Rob Zerban is well-positioned to give incumbent Paul Ryan the toughest fight of his career, with a very good chance to upset him," Maslin wrote in a memo.

The survey found the district, the Wisconsin First, evenly divided on partisan issues … And, after respondents hear one additional paragraph description linking Ryan to the Republican leadership describing his authorship of the House budget plan, his support falls below 50% and his favorable rating becomes like Obama’s and Walker’s—dead even at 46% positive and 46% negative. And... Rob Zerban trails Ryan by only six points after this very brief exposition of Ryan’s signature idea, 49-43%,

Which has produced an amazing Ryan transformation…COMPROMISE on Medicare? Yes, Ryan is doing this all for the cameras. Paul Ryan is a snake, a sneaky con man willing to sell our seniors so the free market can profit from their medical needs. Ryan’s trying to diffuse his Medicare debacle, taking it out as an issue. But Ryan’s original intent can’t be erase. But he’ll try…:

jsonline: Republican House budget chair Paul Ryan has teamed up with Senate Democrat Ron Wyden of Oregon to offer what they're billing as a bipartisan approach to overhauling Medicare … Like the Ryan plan it would shift the fundamental structure of Medicare from a "defined benefit" program to a "defined contribution" program, and those seniors would use the subsidy to purchase health insurance from a menu of government-approved private plans.

Yes, its much like the vilified “public option” Democrats wanted to include in the Affordable Care Act, where private plans would have to compete with the lower government rates.

The new proposal also takes a different approach in how it sets the premium subsidies for seniors, and the rate at which those subsidies could grow over time, as medical costs rise. One of the chief criticisms of the Ryan plan … health costs rising much faster than inflation, beneficiaries over time would be forced to pay the difference … the premium subsidy would steadily erode.

Here’s where things get weird, confusing and problematic:

Under the new plan, the size of the premium subsidies would be tied to the costs of the insurance plans being offered to seniors. Increases in the subsidies would be capped at the growth rate of the overall economy plus one percent. And Wyden said that if health care costs grow at a higher rate, beneficiaries wouldn't necessarily be the ones absorbing the costs under their proposal. "We are rejecting that," said Wyden. "If that happens (if costs go up at a higher rate) Congress has to do its job and look at all other options: lower reimbursement (to providers), higher premiums for the wealthy."

Whether this new plan would in theory save as much money is not clear. Ryan said the new plan would also include consumer protections sought by Wyden.

Ryan can try to hide behind the misguided support of Ron Wyden, but he can’t run from his original plan no matter how hard he tries. And more importantly, Ryan continues to oppose the Affordable Care Act, while offering no other alternative.