Things are starting to heat up over a recent flyer telling recall petition signers to use the name Adolph Hitler, along with a phony address, to send a message to Democrats that job creation must be protected.
The earlier story is here. The most telling line:

“Hitler was willing to destroy Germany in order to get his ideals in place. This is similar to what the recall people are doing in Wisconsin.”

Yea right, liberals are the fascists, not the Wisconsin brownshirts polluting the electoral and political process.
The GAB has asked the Milwaukee DA to check out Mines for Wisconsin: 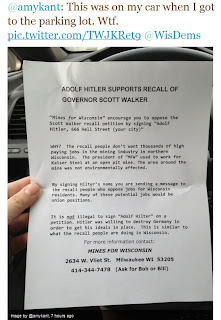 Fox 6: The Wisconsin Government Accountability Board (GAB) is alleging a group called Mines for Wisconsin is telling voters to sign the Scott Walker recall petitions with the name "Adolf Hitler". They are even asking the Milwaukee County District Attorney to look into the matter. In a statement, the GAB says it's illegal to intentionally falsify a name on a recall petition. The GAB says the group may be breaking the law if fliers encouraging group members to falsify the petitions is "genuine".  This is a 180 from what many media outlets reported just a week ago.

Oh, and still no denouncement from Scott Walker or the Fitzgerald brothers. Guess they approve..