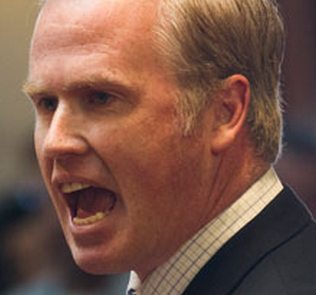 Just when you thought the Republican administration couldn’t get more dictatorial, the Fitzgerald’s up the ante. As a way to keep everyone off balance, Rep. Jeff Fitzgerald wants to manipulate elections right out in the open. Their voter base should love it, so turning our state into a stark raving banana republic can’t be all that bad if they’re in charge. Fitzgerald is not happy with anything that reeks of independence.
After all, the natural state of human existence is conservative orthodoxy.

jsonline-Jason Stein: State Rep. Jeff Fitzgerald … said the state might need to replace its elections and ethics agency, saying it has strayed from its nonpartisan mission. Fitzgerald said he saw advantages to going back to the old elections and ethics board … A spokesman for the accountability board said the agency was simply applying the law during controversial political times.

Fitzgerald probably has something against the words “government” and “accountability” being in the same agency name. No matter how outrageous their elected official perform, power intoxicated Republican voters will take up their fight to win at all costs, even if it contradicts their own earlier efforts:

The state Government Accountability Board was created in 2007 to replace the state ethics and elections board after the elections agency was criticized by Republicans for favoring Democratic Gov. Jim Doyle in his 2006 re-election campaign. The accountability board, which was approved by wide bipartisan margins in the Legislature and signed into law by Doyle, is overseen by a panel of six former judges. But the GAB has been criticized by Republicans during this year's nasty recall campaigns.

I know, it’s hard to believe this is actually happening. I’m waiting for the day they propose a law that would take us back to a time when laws were dispensed from the end of a gun.
And finally, welcome to the Republican dictatorial police state:

Fitzgerald also said Thursday he was introducing a bill to make it a felony to sign a recall petition more than once. The crime would carry a fine of up to $10,000 and up to 3½ years in prison.

That's right, signing a petition more than once is nothing short of a felony and prison time. Of course the threat of phony petitions by Republican voters had nothing to do with recall advocates signing their name more than once?


Fitzgerald also criticized the accountability board for not coming out more strongly (and) criticized the board for saying it would not automatically strike names in the recall petition such as "Mickey Mouse" and instead in some cases would just flag those names for Walker's campaign to challenge. But accountability board spokesman Reid Magney said the board was simply following the law and a process that would ultimately weed out bad signatures.

I have to take a break here...I'm really pissed.