Did you get your Conception Certificate?

Being born is so passe.' Taking that first breath, out of the womb, and officially being recognized as a person with a state sanctioned birth certificate is no longer enough for right wing loons.

Why have a birth certificate, when it means nothing to the big government nanny state Republicans, except to get a voter ID. So let's do away with them.

I say bring on the conception certificates. Oh, and count them for census purposes as well.


jsonline: A freshman lawmaker, State Rep. Andre Jacque (R-Bellevue), is proposing to change Wisconsin's Constitution to grant equal rights to the unborn as part of a national push to reframe the abortion debate, a strategy that has failed in at least two states and has divided abortion opponents in Wisconsin and elsewhere.

Jacque's Assembly Joint Resolution 77 would recast a portion of Wisconsin's Constitution that states that "all people are born equally free and independent and have certain inherent rights, among which is the right to life, liberty and the pursuit of happiness." The amendment would omit the word "born," and identify the terms "people" and "person" as they pertain to the right to life to include "every human being at any stage of development."

No really, any stage!!!
Not even God went that far...from the infallible Bible: 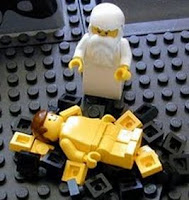 (Genesis 2:7 ) “Then the LORD God formed man of the dust of the ground, and breathed into his nostrils the breath of life; and man became a living soul.” God breathes into the man's nostrils and he becomes nefesh hayya.  "Nefesh" signifies something like the English word "being", in the sense of a corporeal body capable of life.

So we have a lunatic fringe big government freshman legislator getting between a patient and a doctor, big surprise. But it also does away with stem cell research in our state. Goodbye technology sector.

Critics say such bills would have wide-ranging legal and societal repercussions; outlawing certain types of birth control; in vitro fertilization; embryonic stem cell research and abortion in all cases, including when the mother's life is in danger, an exception that exists in the current statute.

In addition, critics say, the amendment would not withstand a constitutional challenge.

"The U.S. Supreme Court has dealt with the personhood of the unborn child and rejected it 23 times," said Armacost of Wisconsin Right to Life. "We're talking about justices who we believe" are on our side . . . but cannot find in the "constitution protection for the unborn child," she said.

Labels: Abortion
Email ThisBlogThis!Share to TwitterShare to FacebookShare to Pinterest