So did one black congressional lawmakers get spit on and another called the n word? Can we believe black congressmen? Is it so hard to imagine them lying to us to make us think racism fuels the tea party movement?

Tony Blankley doesn't know, because to him, it's not at all clear.

Blankley: "But we understand what this drill is, this is a drill, the conversation, the repeating of the nonproven event, is an effort to increase the energy on the left side of the equation because that was the problem in the election coming up that conservatives are more energized than the left, so these kinds of messages, these claims..."

It's a formula that has worked many times before. It's also a form of "projection," a "defensive mechanism by which their own traits and emotions are attributed to someone else."

If conservatives can muddy the waters enough to diffuse the issue, they can get racist tea party members off the hook for their actions, while vilifying a few lying black lawmakers. Joan Walsh is on point and exposes the ploy on the Ed Show. 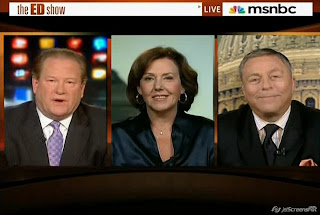