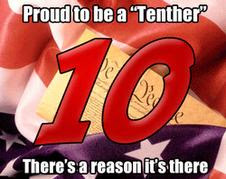 This Tenth Amendment insanity has picked up steam, or hot air, by the tea partiers who don't really have a plan and conservatives trying to drum up money. A quick search explained everything for me, because again, the whole argument is based on nothing, zero, a misdirection play and BS. Check out what I clipped from Wiki:

The Necessary and Proper Clause (also known as the Elastic Clause, the Basket Clause, the Coefficient Clause, and the Sweeping Clause[1]) is the provision in Article One of the United States Constitution, section 8, clause 18:

“ The Congress shall have Power - To make all Laws which shall be necessary and proper for carrying into Execution the foregoing Powers, and all other Powers vested by this Constitution in the Government of the United States, or in any Department or Officer thereof.

The clause provoked controversy during discussions of the proposed constitution, and its inclusion became a focal point of criticism for those opposed to the Constitution's ratification.

The Tenth Amendment, which makes explicit the idea that the federal government is limited only to the powers granted in the Constitution, is generally recognized to be a truism. In United States v. Sprague (1931) the Supreme Court noted that the amendment "added nothing to the [Constitution] as originally ratified."

Labels: Constitution
Email ThisBlogThis!Share to TwitterShare to FacebookShare to Pinterest