National Day of Prayer? "Get that socialized prayer out of my government!" 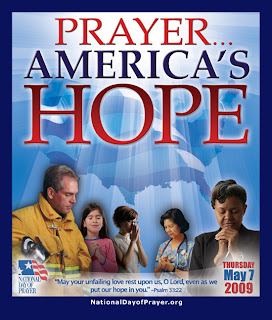 CNN: A federal judge on Thursday struck down the federal statute that established the National Day of Prayer, ruling that it violates the constitutional ban on government-backed religion. "[I]ts sole purpose is to encourage all citizens to engage in prayer, an inherently religious exercise that serves no secular function. In this instance, the government has taken sides on a matter that must be left to individual conscience," wrote the judge, Barbara B. Crabb.

The Obama administration said Obama intends to recognize this year's National Day of Prayer, which is May 6.

The lawsuit, brought by the Freedom From Religion Foundation, says the president
will designate one day "on which the people of the United States may turn to God in prayer and meditation at churches, in groups and as individuals."

Simply put, "day of prayer" boosters want everyone else to be a part of their life style choice. It reassures them that they have the governments endorsement, an "establishment" of prayer, that legitimizes their faith against those who have chosen a different path.
Posted by John Peterson, Democurmudgeon at 4/16/2010 09:33:00 AM