The Deadly Free Market, Deregulated Self Adjusting Dystopian America! A Lesson to be Learned.

Let's take a look at the subordinate working class, in what Bush called the "ownership society." Take the case of Massey Energy's CEO Don Blankenship. Here's how Blankenship views America and capitalism, along with the threat citizens pose to the almighty dollar: 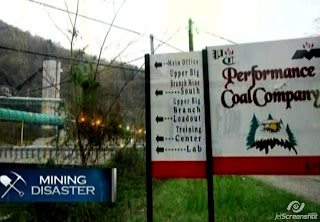 ABC News: As more details continue to surface about the checkered safety record of the Massey Energy coal mine where 25 workers perished Monday, the lavish lifestyle and allegedly cavalier attitude of the company's controversial chief executive … In just one year – 2005 -- Blankenship was paid $33.7 million in compensation … He flies to resorts on a company-owned Challenger 601 luxury jet. And he lives in a house owned by Massey Energy that by contract becomes his property if he leaves … In December 2008 a group of shareholders sued Massey Energy's board members for "blatantly disregarding their fiduciary obligations," in part because of safety violations that allowed employees to die in "preventable accidents."

In the ultimate example of what could be the poster child of free market deregulation to come, check out the following from Michael Shnayerson, who wrote "Coal River":

When Blankenship first took control of the mine, he spent more than a year trying to woo the miners to abandon their allegiance to the labor union that had represented them. "Don made it his own personal campaign. He began flying in every week in his helicopter. He gave pep talks. He took a whole bunch of them on trips to Dollywood, where they went to concerts. He went with them and bonded with them. New cars started turning up in their driveways," Shnayerson said. But as soon as the union was gone, Shnayerson said Blankenship shifted gears. Work hours increased from eight hours to 12 hours. Bonuses were cut. If they got injured, their jobs were at risk. And according to federal mining data, citations and safety violations started to rise.

Eventually, in a deregulated free market system and a long trail of employee deaths, the market will self-adjust. That's capitalism.
Posted by John Peterson, Democurmudgeon at 4/08/2010 10:39:00 AM