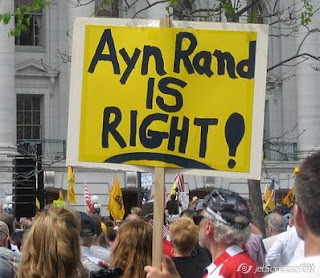 This revealing piece by Matt Taibbi says it all about Randian economics and the politicians who bought into it:

In the Randian ethos, called objectivism, the only real morality is self-interest, and society is divided into groups who are efficiently self-interested (the rich) and the ''parasites'' who wish to take their earnings through taxes. Rand believed government had virtually no natural role in society. She conceded police were necessary, but refused to accept any need for economic regulation.

Rand's fingerprints are all over the Goldman story.

There have been a lot of greedy financiers and banks in history, but what makes Goldman stand out is its truly bizarre cultist/religious belief in the rightness of what it does.

The point was driven home in England last year, when Goldman's international adviser, sounding exactly like a character in Atlas Shrugged, said ''The injunction of Jesus to love others as ourselves is an endorsement of self-interest.''

Even if he stands to make a buck at it, your average used-car salesman won't sell some working father a car with wobbly brakes, then buy life insurance policies on that customer and his kids. But this is done almost as a matter of routine in the financial services industry, where the attitude after the inevitable pileup would be that that family was dumb for getting into the car in the first place. Caveat emptor, dude!

This Randian mindset is now ingrained in the American character.