Only in Wisconsin could the Healthy Youth Act get a sex ed teacher arrested. Never mind the comprehensive sex ed courses world wide that have been in place for decades that pose the same legal risks.

Why would the Juneau County DA Scott Southworth arrest a sex ed teacher:

Southworth said … "Basic education on what a condom is - there's nothing illegal about that," he said. "[When] you have to instruct [children] how to use it - that's where you get into the advocacy issues. Since it is illegal for children to have sex, why are we teaching them how to use contraceptives?" Southworth said he fears the bill will potentially give the parents of teens engaging in sexual acts legal grounds for filing complaints against teachers.

DA Scott Southworth isn't threatening to arrest teachers, just "warning" them that he could if he wanted to, according to the Juneau Star Times:

"I'm not threatening anyone," he said. "The letter was designed to warn them of the law when this act was put into place."

Necedah Area School District Administrator Charles Krupa (said) "He's just stated that this is the law and this is what I'm going to do."

But instructing kids on how to use condoms and girls on the pill, or even providing them with these products, could land PARENTS in jail, not just teachers. If kids get caught "breaking the law" having sex, parents could be arrested for promoting the sexual assault of children and exposing them to criminal liability. Should the legislature be required to pass a law giving legal protection to parents too?

Southworth is also claiming kids can and will be prosecuted for having illegal teen sex, which a Tomah Journal editorial points out:

"…teachers won’t encourage sexual predators as commonly defined; they will encourage sex between teen-agers of similar age (albeit with less risk of pregnancy). Does Southworth remember the 1997 case of Kevin Gillson, an 18-year-old Port Washington man who was prosecuted as a sex offender for impregnating his 15-year-old girlfriend? The community overwhelmingly sided with Gillson, not with the District Attorney. Does Southworth intend on prosecuting such cases in Juneau County? If not, then how can he threaten a teacher for indirectly encouraging an activity that his office either can’t or won’t prosecute?

From WPT's Here and Now: 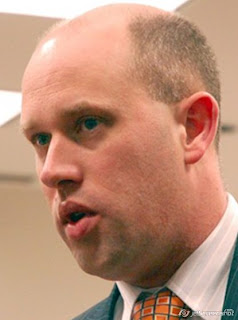 In a related issue, and just as important, Southworth's other argument:

Janet McCauley, a speech pathologist in Mauston schools and a member of the Mauston Ministerial Association, (says) "It tramples on the rights of the school board to choose their own curriculum," she said. "Once the state comes down and starts dictating what a local community has to include - it is very dangerous."
Southworth … "I found it insulting the state Legislature doesn't believe that we have the ability to decide what to teach our children."

Southworth and McCauley appear to be arguing against all statewide educational standards, since communities are so much better at deciding these things. Why have schools at all, since parents know what's best for their kids and can figure that out themselves.
Posted by John Peterson, Democurmudgeon at 4/12/2010 09:13:00 AM