David Cay Johnston on Poor Paying No Federal Tax: "I would think the tax cuts promoted by Pres. Obama Would be Popular for her (Palin)."

In the video below, Lawrence O'Donnell clearly defines the tea party movement from the recent NY Times poll results. Journalist and author of "Free Lunch," David Cay Johnston, offers up a bunch of tea party criticisms, including the following:

"They (tea partiers) think they're pursuing their own interests...The reality is they would be much better off under a system that is truly progressive. They would see that they would have a lower burden, they would have fewer risks, and their families and their children would be better off and they could save more money to do what they wanted to do with their lives. Those are fundamental issues that are being ignored here, but you've got to remember, the news media has done a lousy job of explaining anything."

I received this reminder in an email from Mr. Johnston about the poor's actual tax burden:

"Subtle but important point -- the poor do not pay federal income tax, but they do pay plenty of federal taxes if they work. About 3/4ths of Americans pay mors in payroll taxes than income taxes." 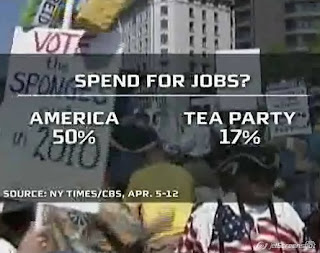