Does Fox News' Bill O'Reilly Lie? Without a Question!

I know I'm posting this a little late, but it's too good not give some added blog space to this outright gotcha.
Bill O'Reilly flatly lies about his network never suggesting that people would be hauled off to jail if they don't buy health insurance or pay the tax. Despite the video proof, days later O'Reilly continued to make the claim. How do you debate or take seriously a party that ignores reality?
Oddly, that's why they're winning the message war. 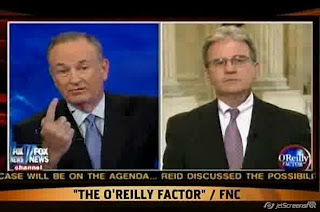