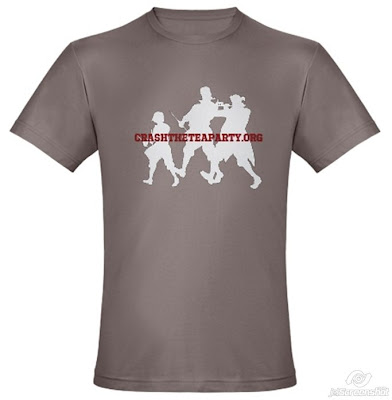 Thanks to the press' desire to stoke a good political fight for ratings, they have allowed to go uncontested the multitude of fictions, lies and opinion that has now created the irrational tea party movement. The media coverage has "legitimized" a tea party movement that is challenging our sanity, the rule of law and cramming an absolutist view of the constitution down our throats.

So what can be done now, so late in the game, to weed out the racist, bigoted fear mongering antigovernment hoards poisoning the body politics? Crash the Tea Party.

AP: Opponents of the fiscally conservative tea party movement say they plan to infiltrate and dismantle the political group by trying to make its members appear to be racist, homophobic and moronic. Jason Levin, creator of Crash the Tea Party.org, said Monday the group has 65 leaders in major cities across the country who are trying to recruit members to infiltrate tea party events for April 15 … "Every time we have someone on camera saying that Barack Obama isn't an American citizen, we want someone sitting next to him saying, 'That's right, he's an alien from outer space!'" Levin said. "Do I think every member of the tea party is a homophobe, racist or a moron? No, absolutely not," Levin said. "Do I think most of them are homophobes, racists or morons?Absolutely."

So what would be the response from a movement that that believes health care covers illegal immigrants, pays for abortion, is a government takeover, has death panels for the elderly, Obama is a socialist, Muslim, not born here, doing what Hitler did, may be the antichrist, didn't know they got a tax cut and flips logic and reality on its head?

Tea party members said the backlash comes from ignorance. "They can't actually debate our message and that's their problem," said Bob MacGuffie, a Connecticut organizer for Right Principles, a tea party group that also has members in New York and New Jersey.

Yes, we're the ignorant ones who can't debate the phoney list of fear mongering issues. That's the ticket. And so the "debate" continues...
Posted by John Peterson, Democurmudgeon at 4/13/2010 10:31:00 AM