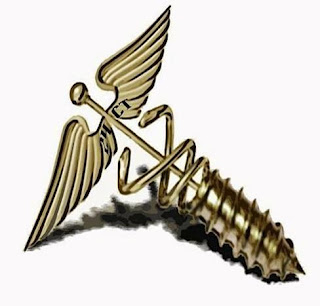 In a glimpse of health care power plays to come, the insurance industry is now suing the state of Massachusetts for denying huge rate increases. Isn't it time for these guys to go?

A half dozen state health insurers, warning they faced collective losses of hundreds of millions of dollars this year, today filed a lawsuit seeking to reverse last week's decision by the Massachusetts insurance commissioner to block double-digit premium increases.

Insurers had proposed base rate increases averaging 8 to 32 percent … health insurers argue that government is forcing them to sell policies at a loss that is unsustainable as the cost of medical services climbs. "What the commissioner did, we think, is going to create tremendous disruption in the marketplace," said Dean Richlin, a partner at Boston law firm Foley Hoag, who represents insurers.

Not that the disruption of coverage for someone with a pre-existing condition is more important than the hungry for profit "market." The horrors of a less profitable market, or the loss of a few poorly run bloodsucking insurers, can't be the end of the world can it?

"As a result of the commissioner's action," Richlin said, "the insurance companies will experience substantial and, in some cases, staggering losses. We estimate the collective loss among all of the insurers will run into the hundreds of millions of dollars just for 2010.

Bye bye! Our hearts are breaking. Maybe insurers are a little loose with their money, or perhaps their CEO's paychecks and bonuses are excessive.