What the hell is happening in this country? Should the South rise up again?

Honoring the Confederate army and their fight against the "aggressive North" is sending powerful political message to the tea parties and radical Republican Party members. Virginia Governor Bob McDonnell is an amazing "moderate," which is also a scary harbinger of things to come. Below, the video clip features former black Virginia governor Doug Wilder, former NAACP leader Julian Bond and Rep. Jim Moran. There historical perspective is invaluable on this issue.

But what does it all really mean? Does all of this conjure up the possibility of treasonous acts against the government? An opinion blog to follow this one, will try to answer that question. 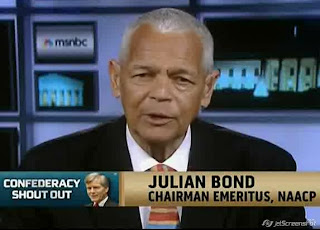