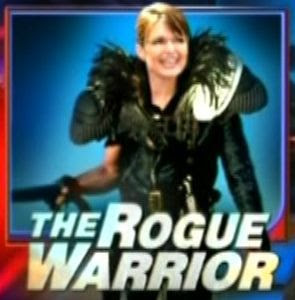 AP reporter Liz Sidoti,wrote this headline: "Palin, Obama spar from a distance" as if to suggest there existed some equivalent comparison between the two politicians. A dumbass half term governor with a speech writer, and a president with experienced advisors that include the secretary of Defense and the Joint Chiefs of Staff?

Are Americans on a collective bad trip? Sidoti surrealistically writes:

"President Barack Obama and Republican Sarah Palin sparred from a distance over nuclear policy with each questioning the other's experience on the issue in a potential preview of the 2012 White House race."

It's as if Palin has any credibility, one shred of understanding, on the issue of "nukular" reduction treaties.

And Obama didn't really directly respond to Palin's bizarre opposition to the treaty, but was instead answering a question asked by an ABC News reporter about Palin's recent statement, like it really mattered.

"No administration in America's history would, I think, ever have considered such a step that we just found out President Obama is supporting today."

What earth is Palin referring too? As far as Obama's answer:

"I really have no response. Because last I checked, Sarah Palin's not much of an expert on nuclear issues ... If the secretary of Defense and the chairman of the Joint Chiefs of Staff are comfortable with it, I'm probably going to take my advice from them and not from Sarah Palin."

Mocking the president, she (Palin) dismissed

"all the vast nuclear experience that he acquired as a community organizer."

How wrong is Palin? Check out Obama's EXTENSIVE experience below. Getting mileage now before Palin's bullshit completely disproved is a common conservative ploy. Obama is taking the advice of experts, by the way, he's not drawing from his experience as a community organizer.

And this is how the media will be treating the crazy lunatic anti-government Ayn Randers and Milton Friedman wanna-be's, the ones who had the ideological balls to create the Great Recession, and ignore it.


Simply put: What Palin, Gingrich and every other tea partier and Republican authoritarian wants to do is direct the threat of nuclear inhalation to anyone who dares to challenge us. The power of Lex Luthor on steroids.

Obama took fact-finding trip to former USSR to examine WMD stockpiles. In 2005, in his first foreign trip as a U.S. senator, Obama traveled to Russia, Ukraine and Azerbaijan with Sen. Richard Lugar (R-IN), then-chairman of the Foreign Relations Committee. The purpose of the trip was to examine facilities for the storage and destruction of conventional, biological, chemical, and nuclear weapons. Obama and Lugar subsequently co-wrote a December 2005 Washington Post op-ed on the issue and appeared together in a discussion at the Council on Foreign Relations on "Challenges Ahead For Cooperative Threat Reduction," in which Obama detailed ways to improve the U.S. program to control, secure, and dismantle weapons of mass destruction in the former Soviet Union.

With Lugar, Obama co-authored non-proliferation initiative signed into law by President Bush. Obama and Lugar co-authored the "Lugar-Obama non-proliferation initiative," which "enhances U.S. efforts to destroy conventional weapons stockpiles and to detect and interdict weapons and materials of mass destruction throughout the world." The legislation was signed into law by President Bush in January 2007. According to a June 28, 2007, press release from Lugar, he and Obama subsequently secured "$36 million for programs to destroy heavy conventional weapons, $10 million for efforts to intercept weapons and materials of mass destruction, and $2 million for rapid response to proliferation detection and interdiction emergencies."

Lugar praised Obama's "productive" work on nonproliferation that took "next critical step" on the issue. In an August 2008 Fort Wayne Journal-Gazette op-ed (retrieved from the Nexis database), Lugar wrote that "Sen. Obama has worked with me, productively, on non-proliferation issues. We jointly introduced a bill that strengthened U.S. defenses against proliferation of weapons of mass destruction."

He further wrote: Sen. Obama joined me in developing legislation in 2005 -- long before he was a presidential candidate -- to address emerging proliferation risks. After significant study and site visits, it became clear to us that additional safeguards were required to strengthen the lines of defense between unsecured weapons of mass destruction and U.S. borders and to deal with vulnerable stockpiles of conventional weapons and hand-held anti-aircraft missiles. The Nunn-Lugar program has provided a solid foundation, valuable experience and measurable results. With the Lugar-Obama legislation, we took the next critical step forward to refocus and reinvigorate our country's non-proliferation mission.

In 2005, I traveled with Sen. Obama to Russia, Ukraine and Azerbaijan to oversee a number of proliferation projects. In Russia, we visited Nunn-Lugar sites where nuclear weapons were being dismantled and stored. In Ukraine, we inspected the Donetsk State Chemical Production Plant, a conventional weapons destruction facility where the U.S. has taken the lead in a three-year NATO program to destroy the weapons. At that facility, more than 117,000 tons of ammunition and 1.1 million small arms and light weapons are slated for destruction within 12 years. During the visit we encouraged Ukrainian officials to expedite destruction efforts and expand cooperative threat reduction of conventional weapons. In Azerbaijan, we observed sea interdiction exercises in the Caspian Sea and encouraged leaders there to continue their cooperation with the United States.

These programs are ongoing. For a relatively small investment they are making a huge difference to U.S. and global security.
Posted by John Peterson, Democurmudgeon at 4/10/2010 11:04:00 AM