Vote the Rascals Back In! Losing Formula an Election Year Winner. Are We in Wonderland Yet? A Christmas Carol in Reverse? 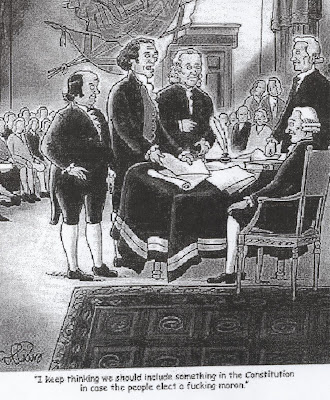 Let me get this right; After the Republican Party's economic policy since 1995 resulted in what we now call the Great Recession, which has now become even more radicalized by the tea party movement, is about to be swept back into power recovery isn't happening fast enough?

Oblivious to this whole notion, the major news media has avoided connecting the dots. It's a whole lot more fun watching the GOP beat the Democrats bloody for stopping a recession and providing health care for the uninsured.
Ayn Rand couldn't write or more wacky story line than this. No more social safety nets for sick and elderly, no more unemployment checks if they add to the deficit in a recession, no more environmental restrictions protecting our air and water, no more compensation for product injuries and deaths and no more financial protections on an already deregulated Wall Street.
Good luck folks, you've now been given your constitutional freedoms and liberties back.

Wisconsin State Journal: Wisconsin tea party members are … working hand-in-glove with GOP leaders … tea party … positions, such as deep cuts in social services, strong anti-immigrant policies and the right for citizens to carry guns in public places … are not popular among many moderates.

Nancy Milholland, 47, an unemployed sales manager and organizer of the Racine County Tea Party … said Republicans must do more to cut taxes, spending and the size of government … "We are the people that were screaming and yelling at Bush, by the way, when he was spending."

I don't recall seeing the tea party movement back then. Did I miss something when the tax cuts, the Iraq war and Medicare Part D were passed but not paid for? Did I miss their protests when the Patriot Act passed time and time again?

Unfortunately, the following statement is not true:

Scot Ross, director of the liberal advocacy group One Wisconsin Now, said he believes the tea party movement will force Republicans to move further to the right, hurting their chances with voters in November.

Ross is a victim of liberal "projection," "a defense mechanism by which your own traits and emotions are attributed to someone else." Not one of the conservatives I've talked to believes in anything coming from the media, liberals or Democrats. Nothing. Irrefutable evidence and historical fact is liberally tainted propaganda. Even though the constitution was never meant to be a ridged "check list" of every right you were ever given, in anticipation of societal progress, it is now. As for progress:

Gov. Jim Doyle's approval rating is at an all-time low (because) Doyle has had to deal with record-high state budget shortfalls and high unemployment over the past year. Republican Scott Walker holds a 44 percent to 28 percent edge over Dem. Tom Barrett and Republican Mark Neumann holds a 43 percent to 29 percent advantage over Barrett. Former Gov. Tommy Thompson leads Sen. Russ Feingold 45 percent to 33 percent.