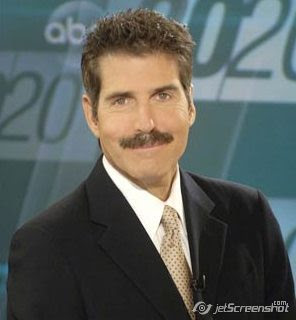 American's are losing the income battle, earning less than they made 30 years ago, and watching the wealthy elite get million dollar bonuses at taxpayer bailed out companies.

So what's so difficult to understand ? If your John Stossel, there's another explanation:

"I know that's a myth now. So I was glad to see the publication of 'The 5 Big Lies About American Business' by Michael Medved ... Medved's second myth is that when the rich get richer, the poor get poorer. This is the old zero-sum fallacy, which ignores that when two people engage in free exchange, both gain -- or they wouldn't have traded. It's what I call the double thank-you phenomenon. I understand why politicians and lawyers believe it: It's true in their world. But it's not true in business.

It's the two worlds argument again, introduced during the Bush administration. The fact base reality, and the reality created by conservatives. Medved explains:

"If you believe that when the rich get richer, the poor get poorer, then you believe that creating wealth causes poverty, and you're an idiot," said Medved. "One of the things that I hate is this term 'obscene profits.' There are no obscene profits ... . (The current economic downturn shows) "that when the rich get poorer ... everybody gets poorer."

Of course, nothing could be further from the truth. Instead of ideologically based opinions passing for fact, why not use the available research? This article just appeared in last Sundays Parade Magazine:

Even as the economy shrank last year, the income gap—the divide between the country’s richest and poorest citizens—kept growing. In 1978, CEOs at the largest U.S. companies earned 35 times as much as the average worker. Today, that figure is more than 300:1, according to the Harvard Business Review.

Research by Kevin Hallock, a professor at Cornell University, indicates that the trend persists: “From 1979 to 2009, after adjusting for inflation, the highest earners in the U.S. saw dramatic growth in their earnings while the lowest earners now make less than they did 30 years ago.” Countries with greater income inequality have higher rates of teen pregnancy, infant mortality, obesity, mental illness, drug use, imprisonment, and homicide than countries where wealth is more evenly distributed, according to research by epidemiologists Richard Wilkinson and Kate Pickett.

In the U.S., measures like the progressive income tax, Medicaid, and welfare are used to address income inequality, but some economists and advocates say that we should go further. Nations like Austria, Belgium, and the Netherlands spend 7% to 8% of national income on social services for working-age people, compared to 2% in the U.S.

That figure is unlikely to change, however, as polls show that Americans believe people get ahead in life by virtue of their own efforts. “If you think the process is just, you might think the outcome is just, even though some people are homeless and others are very comfortable,” says Gary Burtless of the Brookings Institution.