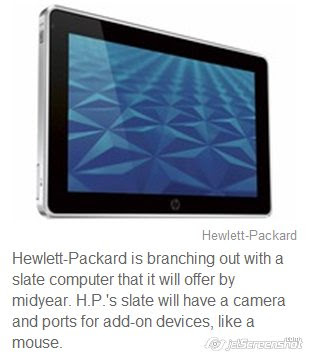 Here's the latest on a better e-reader, finally, leaving the iPad to wallow its own exclusive little world of Jobs approved technology. Wouldn't be nice to buy something that works just like your computer and search engine, and doesn't try to force the internets to adopt new standards to function fully? Go to hell Apple!

NY Times: Microsoft is flirting with the idea of selling its own version of a slate (iPad), joining traditional computer companies like Hewlett-Packard that have already committed to such products.

H.P.’s version of the iPad is expected to be released by midyear. Notably, it will have a camera, as well as ports for add-on devices, like a mouse. Also, it will, the company says in a promotional video, “run the complete Internet,” including videos and other entertainment.

Google — a search and advertising company — is soon expected to begin selling its version of a slate computer, like Apple’s iPad, while Nokia — the world’s biggest cellphone maker — is planning to enter the digital book market through a slate-cum-e-reader as well.

Labels: Technology
Email ThisBlogThis!Share to TwitterShare to FacebookShare to Pinterest