Starting with Reagan, government was trimmed back and vilified, free trade agreements off shored jobs and manufacturing and the rules running Wall Street were done away with and relaxed. We started seeing higher unemployment and lower wages. So knowing that, the tea party protesters and Republicans are pushing for greater deregulation and faith in the free market system, under the ill conceived rantings of freedom and liberty.
It doesn't make any sense. Mike Ivey wrote as much in this Capital Times piece, using the argument I just made above in the words of the conservative business lobby, Wisconsin Manufacturers & Commerce. How ironic is that?:

"Unemployment is high. We lost 120,000 jobs in 2009 alone, which wiped out 15 years of employment growth. We have fewer people employed today than at any time since 1995. Personal income declined by 2 percent in 2009, the first such decline since 1949. "We have experienced a 4.3 percent decline in the number of private business establishments since 2006, a loss that surpasses those of all neighboring states and the nation. And we have lost so many manufacturing jobs that for the first time in state history more people are employed by government than the manufacturing sector."

Hard to argue with those numbers. But hasn't the free market, no regulation, no tax crowd pretty much had its way the last 30 years? I'd argue that trickle-down economics has been an utter failure, widening the gap between rich and poor while rewarding excessive greed and risk taking.

My favorite recent factoid is that the amount of money paid to the top 25 hedge fund managers last year was enough to hire 658,000 new teachers. You tell me whose priorities are skewed.

Tea party complainers in the video below, about 4500 of them, have no real solutions, just liberty and freedom. 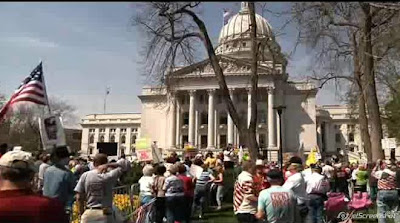 The Poll number below proves tea partiers oppose a health care plan they don't understand, simply because they thinks its "big government."

A new Associated Press-GfK poll finds Americans oppose the health care remake 50 percent to 39 percent. Only 28 percent said they understand the overhaul extremely or very well … And a big chunk of those who don't understand it remain neutral.

Jim Fall, 73, a retired computer consultant: "I don't like the idea of the government dictating what health care should be like. Nor do I like them taking money out of Medicare."