Who could oppose making our world safer. Even President Ronald Reagan sought to sought to do away with nuclear weapons completely. But:

The GOP could well see an irresistible opening to criticize the broader security policies of Obama and his Democratic allies. Republicans … could seek to postpone its ratification to deny Obama a victory ahead of the November midterm elections.

Even Sarah Palin is adamantly against such a weak kneed plan: 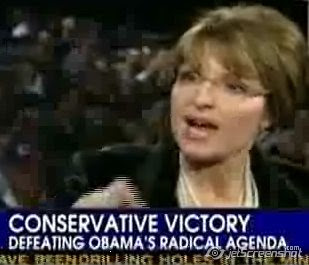 AP-The nuclear weapons cuts President Barack Obama and Russian President Dmitry Medvedev signed would shrink the Cold War superpowers' arsenals to the lowest point since the frightening arms race of the 1960s ... leaders of 47 countries will gather in Washington in an effort to prevent the spread of nuclear weapons, crack down on illicit nuclear trafficking and lock down vulnerable nuclear materials around the world.

Why should Republicans learn from history, when it's so much easier to sabre rattle?:

NYTimes: In the spring of 1957, President Dwight D. Eisenhower … rule out waging nuclear war against non-nuclear states … mutual assured destruction became America’s de facto policy for the rest of the cold war, which ended when the Russians gave up. Eisenhower … become worried by a growing clamor emanating from the Pentagon, supported by “wizard of Armageddon” intellectuals like Henry Kissinger and Democrats keen on retaking the White House, that the United States could wage, and win, a “limited” nuclear war. If that happened, Eisenhower firmly believed, the war would inexorably escalate into a thermonuclear holocaust.
President Obama announced a new American approach to nuclear war that comes right out of Eisenhower’s playbook. And, indeed, Mr. Obama quickly came under criticism from those who have argued that, just as their predecessors did in the 1950s, that limits on the use of atomic weapons somehow make a nuclear war more likely. “By further unilaterally limiting the circumstances in which the U.S. would use nuclear weapons to protect itself and its allies,” warned John Bolton, the former United Nations ambassador, “the Obama administration is in fact increasing international instability and the risks of future conflicts.”

If the rest of the world is going to trust America to supervise a nuclear-free world, it hardly needs to be said that the United States must forgo using its vast nuclear arsenal for any political or military purpose save basic deterrence.
Posted by John Peterson, Democurmudgeon at 4/08/2010 10:02:00 PM

Labels: War
Email ThisBlogThis!Share to TwitterShare to FacebookShare to Pinterest