Have they no shame? Blurring the line between right and wrong.

Isn't it funny how forgiving the news media is over the crazy racist insanity of the conservative movement. Can they get any more overt in their messaging. Slavery isn't even considered a major reason by we had a civil war. Good God. 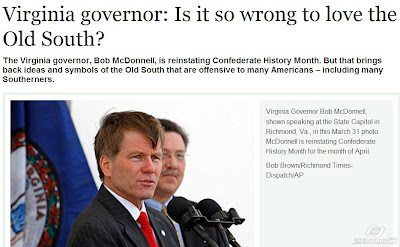 Think Progress: Calvin E. Johnson, Jr., who chairs the Confederate History and Heritage Month Committee for the Sons of Confederate Veterans, sent around a press release touting the group’s success: