Republicans to Democrats on Finance Reform: "Let's get back to the table." The same "let's start over" Stall.

Like the health care debate, the Republicans are creating a list of make believe issues to oppose Wall Street reform. Why else are they meeting with Wall Street bankers behind closed doors?

NY Times: The president rejected the contention of Republicans — and notably … Mitch McConnell, that the measure offered by Senate Democrats would only make bailouts of gigantic, risk-laden institutions more likely.

Democrats aren't about to support future bailouts, but Republicans must convince voters otherwise, by fabricating an imagine alliance between conservative free market bankers and Democrats. Good luck. Republicans arecreating out of whole cloth, a fiction to appear populist, and please Wall Street Bankers by blocking reform. They've also framed the phony debate with the following comments.

“Democrats are beginning a new season of spending on Capitol Hill and a new season of bailouts,” Representative Mike Pence of Indiana, chairman of the House Republican Conference, said. “This so-called financial services bill is nothing more than a permanent bailout."

McConnell repeated his assertion that the bill would merely enable future bailouts … “We cannot allow endless taxpayer-funded bailouts … McConnell acknowledged his own support for the $700 billion bailout in 2008 when the Bush administration warned of an imminent crisis … "My message to the president, quite simply, was, ‘Let’s get back to the table."

“This is the same stall we got on health care,” said the Senate Democratic leader, Harry Reid of Nevada.

What McConnell and Pence are calling "a bailout" is spelled out below. Rachel Maddow and Howard Fineman point out the hypocrisy and lie that taxpayers will ever bailout the banks again. 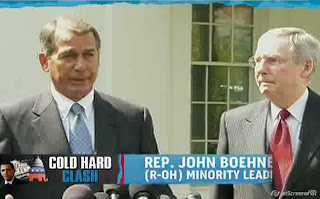 The aspect of the regulation that Mr. McConnell most focused on — the creation of a “resolution authority” to seize and dismantle a financial institution … A $50 billion “orderly liquidation fund,” created from fees charged to the largest banks, would help pay for the takeover. The House version of the bill, approved in December, would create a $150 billion fund.

The Democrats’ senate bill would let the Treasury secretary take over any giant company that posed systemic risk to financial stability, and essentially force it out of business.

The Republican strategy … is carefully calibrated for a highly competitive midterm election year … Republicans seek to oppose the Democrats’ bill while not appearing to side with the banks at a time when popular anger at Wall Street is high.

Jen Psaki, the deputy White House communications director, wrote in a blog post on Tuesday, rebutting the criticism from Mr. McConnell: “The Senate bill explicitly mandates that a large financial firm that faces failure be allowed to fail.”

Speaker of the House Nancy Pelosi (D., Calif.) rebuffed the Republican argument, calling it "such a diversion from the facts it's almost laughable, it's sad."

"For them to say it's a bailout for financial institutions just defies credibility," Ms. Pelosi said.