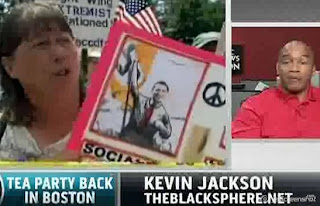 This is unintentionally funny stuff. While Kevin Jackson, of Theblacksphere.net, went on and on about having never seen any signs of racism at tea party rallies, the video footage running beside him was anything but.

Kevin Jackson: "It just flatly doesn't occur. You know all the racism that supposedly occurs, I would love to see it. I've been chasing the tea party races for quite a few months now, and I've yet to find anybody from the right that I would declare as a racist."

MSNBC host: "We're looking at some pictures, obviously these are the fringe elements which we refer...but there's Obama being painted a mustache on to look like Hitler there..." 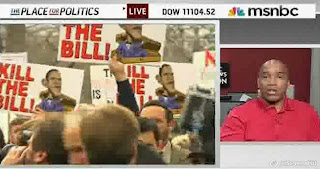