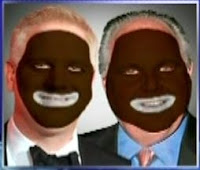 In this post-racial age, thanks to President Barack Obama, we no longer have to think about our horrific racial past. Now, we can just read about it like it never went away. And it didn't.

For years the local school board has permitted hundreds of white students to transfer from its Tylertown schools, which are about 75 percent African American and serve about 1,700 students, to another school, the Salem Attendance Center, which is about 66 percent white and serves about 577 students in grades K-12. The schools are about 10 miles apart. Salem became "a racially identifiable white school while the student enrollment of the Tylertown schools has become predominantly black" because of the transfers, U.S. officials alleged in December, based on data from the 2007-08 school year, according to Lee's order. At the same time in Tylertown four K-12 schools, "District administrators group, or 'cluster,' disproportionate numbers of white students into designated classrooms . . . resulting in significant numbers of segregated, all-black classrooms at each grade level," the judge wrote, summarizing the Justice Department lawyers' case.

And now the tea parties are completely denying race has anything to do with the current uprising spurred on by...health care reform?

Electing a black president brought about real post racial change, huh?
Thanks to The Frustrated Teacher for the heads up.
Posted by John Peterson, Democurmudgeon at 4/14/2010 02:30:00 PM

Labels: Racist
Email ThisBlogThis!Share to TwitterShare to FacebookShare to Pinterest