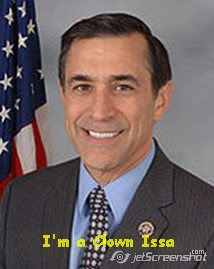 The SEC's inspector general conducted 33 probes of employees looking at explicit images in the past five years … the memo says 31 of those probes occurred in the 2 1/2 years since the financial system teetered and nearly crashed.

So how is the media treating the phony outrage and irresponsible Republican lawmakers comments and blame shifting? Like it really means something, what else.

The memo provides fresh ammunition for Republicans who suspect the timing of the SEC's lawsuit last week against Wall Street powerhouse Goldman Sachs Group Inc. News of the suit came as the Senate prepared to take up a sweeping overhaul of the rules governing banks and other financial companies.

Republican lawmakers also accused the SEC of being influenced by politics.

Gee, ya think? You'll notice below the free market capitalist conservative commissioners at the SEC didn't want an investigation. After all, the whole private sector thing is "self adjusting." Government should stay out of crashing global markets.

The SEC's commissioners approved the Goldman charges on a rare 3-2 vote. The two who objected were Republicans.

The definition of insane…is Republican economics.
Posted by John Peterson, Democurmudgeon at 4/23/2010 01:33:00 PM