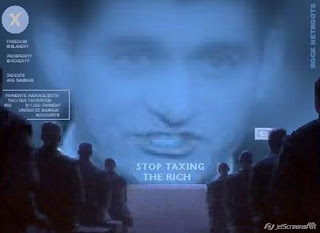 I've had it up to here with Paul Ryan's imaginary world of marshmallow friendly corporations and fiscal Kool-Aid lakes we'd all be happy to dive into despite our deepening debt. Let's tear apart his economic alchemy.

This is from a March 31, 2010 speech by Rep. Paul Ryan to the Oklahoma Council of Public Affairs, Future of Capitalism:

Americans are preparing to fight another American Revolution … Should unchecked centralized government be allowed to grow and grow in power ... or should its powers be limited and returned to the people?

Ryan's perpetuates the conservative word games that have been fooling people for years. Only a con man would try to give people the idea that small government RETURNS the power to the people, which is just the opposite. It would reduce the peoples roll in government. I remember a conservative talk host speaking before a tea party protest at our capital, demanding the people take their government back. Did they have it wrong? Ryan would take it back and then hand it over to the very businesses that already own and control congress. Ryan would essentially get rid of the elected middle man.

"Should irresponsible leaders in a distant capital be encouraged to run up scandalous debts without limit that crush jobs and stall prosperity ... or should the reckless be turned out of office and a new government elected to live within its means?"

Didn't Ryan see how Wall Street bankers brought down the global economy? Sure politicians contributed by repealing and not enforcing the laws, but big business crushed jobs, stalled prosperity, outsourced manufacturing and weren't turned out of their offices but given bonuses. It's the debt forced on us by corporate recklessness we should think scandalous.

Ryan also warns us that we might turn into the god awful forward looking economic force that is Europe, a trading friend and ally.

"…we are approaching a "tipping point. Once we pass it, we will become a different people."

Complete BS. Back it up Ryan.

"Once we have gone beyond the "tipping point," that self-sufficient outlook will be gradually transformed into a soft despotism a lot like Europe's social welfare states. Soft despotism isn't cruel or mean, it's kindly and sympathetic. It doesn't help anyone take charge of life…"

Ryan really thinks we should FEAR a kindly and sympathetic government? But it's at this point Ryan goes right off the Richter scale with fictions, silly analogies and scare tactics.

"but it does keep everyone in a happy state of childhood. A growing centralized bureaucracy will provide for everyone's needs, care for everyone's heath, direct everyone's career, arrange everyone's important private affairs, and work for everyone's pleasure. The only hitch is, government must be the sole supplier of everyone's happiness ... the shepherd over this flock of sheep."