If you were to believe the Republican Party of Wisconsin, you'd think were handing fistfuls of money over to the criminal scum of the earth to take care of our children running day care centers.

WisGOP: Senator Kathleen Vinehout('s) (D) new proposal (would loosen) restrictions on criminals who would continue to defraud the state of taxpayer dollars through the embattled Wisconsin Shares childcare program. This operation was found to be rife with fraud with hundreds of thousands of dollars going to line the pockets of convicted criminals and those cheating the system.

“…Vinehout is trying to let criminals back onto the government dole while spending more taxpayer dollars to do it,” Senate Republican Leader Scott Fitzgerald said. “With this apparent flip-flop, she is clearly perpetuating the problem of waste and fraud in government"

Sounds like we need a "right to carry" law allowing pre-schoolers to pack heat, or take a closer look at what constitutes "waste, fraud and who are convicted criminals." From Frederica Freyberg, Here and Now: 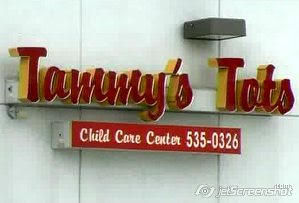 To tough on crime, truth in sentencing state budget buster laws and disbelief in rehebilitation GOP will never pass up a chance to scare the public. The profile of a hardened criminal now about to be protected by Vinehout?:

JSonlin: Vinehout said she heard from a couple of providers with "extreme cases" that had been barred from the program. One was caring for her gravely ill, bedridden father who has a criminal conviction, and as such the woman was forced to choose between caring for him or relinquishing her in-home child-care license. In other cases, providers themselves had criminal convictions that were decades old. "People change. Rehabilitation can happen," Vinehout said. "It has to be on a case-by-case basis."

Unfortunately, the spineless nature of the Democratic Party would allow the loudest whiners and "sky is falling" fear mongers the upper hand:

State Sen. Robert Jauch (D-Poplar) said "If you begin to reopen the manner in which the department should consider these suspensions, you incite a political war from some of the strident critics who will see any common sense legislation as a weakening of the state's resolve to It would be viewed as weakening and lowering the bar." . . . combat fraud.

Well then, I can't think of a better reason than that to discourage small businesses from growing. After all, once a criminal, always a criminal.
Posted by John Peterson, Democurmudgeon at 4/03/2010 12:16:00 PM