Affordable Care Act Successes downplayed by GOP expectations of perfection, but only on Democratic programs.

While the Affordable Care Act has given 16 million more people (marketplace and Medicaid expansion) the ability to get health insurance, that's not good enough for Republicans and right wing think tanks. Yet they would never think to compare the old system that shed as many sick people as possible for higher profits, with the Affordable Care Act.

Criticism of a GOP plan, renamed ObamaCare, by Republicans is crazy enough, but saying the whole thing has failed because it wasn't perfect suggests to me that trying anything would be a waste of time. And yet their own chaotic "plans" use huge parts of ObamaCare as well.

The ACA marketplace signed up 10 million people. That was the initial rush. That now expected to become more of a trickle. But is that failure?

So here's the deceptive meme now that's as ridiculous as ever. That's because the ACA is nothing but a marketplace of private insurance plans. If it's failing, blame the private sector, not the government that simply gave them a national mall for Americans to shop in.


Two nonprofit health insurance co-ops that were established under the ACA announced on Friday that they were going out of business for financial reasons ... the latest in a string of eight such coops that have closed their doors in recent months ... That means that only 15 of the original 23 co-ops will remain in business next year.

Some ideas work, and some don't work so well right? But 15 workable coops is still pretty good. Republicans are also not exactly touting the fact that because the Obama administration is playing hardball with the coops to rein in spending, some have been forced to close.

The GOP plans all have one huge flaw in common; they would allow Americans to buy stripped down plans with little coverage but high monthly premium payments and deductibles. Sure junk insurance policies will be cheaper, but the risk of bankruptcy and death increases dramatically, not a good trade-off. And that's American exceptionalism at work?

Here's how ObamaCare is paid for, meaning it isn't adding to the deficit, but reducing it. True freedom and liberty for all by the way is a single payer system where not one dime is spent on bills by individuals and not one doctor is excluded, ever: 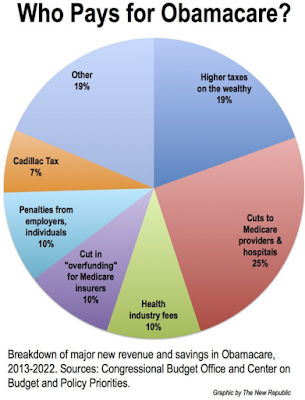