Debates hosted by party Opponents is bad because....?

The complaints below are premised on the idea that the CNBC GOP debate moderators came across like their partisan liberal opponents, and that it was so unfair whine, whine, whine....

I say, what's wrong with that? I would have no problem with moderators acting like either liberals or conservatives, asking tough gotcha questions. It's a debate for gods sake.

And that's what makes the following admissions by Cruz, Giuliani and Gutfeld so bizarre, they don't want to be challenged, they just want safe party line questions. 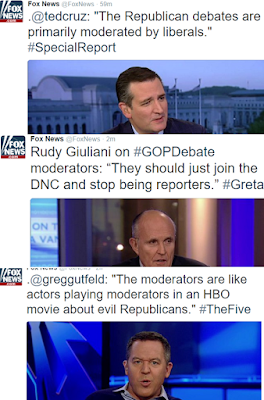 Geez, can't take the heat wimps....here's an even better way of saying it: