The Affordable Care Act is about to get repealed via reconciliation, needing only 51 votes in Senate. Republicans will tell you the cut in ObamaCare taxes will spur on new jobs and increased federal revenues. Like everything based on supply-side economics, it's a false assumption that will toss tens of millions of Americans of their insurance.

Republicans have asked CBO to score their proposed repeal of ObamaCare, and all the tax cuts they say are slowing the economy with "dynamic scoring."

Supply side-macroeconomic-dynamic scoring: It goes by different names but the end result is the same; a failed theory that has never worked. But fear not, Republicans are making a valiant effort to breathe life back into dynamic scoring, by forcing the CBO to use their trickle down, macroeconomics formula based on the belief in fairy dust, hoping for a different result this time around:

As an interesting aside, the article suggested this possible safe guard:


Given this, CBO and JCT should develop a macroeconomic model that considers how a proposed bill would impact inequality—and therefore economic growth.

What Repeal would do: GOP dynamic scoring will cover up the devastating effects of repeal with dreamy theories of job creation and cheaper health care costs. In reality, tens of millions will lose their health care coverage: 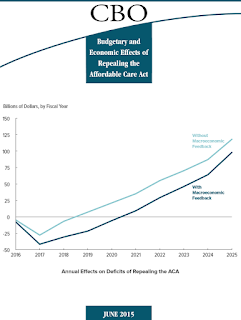 Excluding the effects of macroeconomic feedback—as has been done for previous estimates related to the ACA (and most other CBO cost estimates)—federal deficits would increase by $353 billion over the 2016–2025 period if the ACA was repealed.

Repealing the ACA would cause federal budget deficits to increase by growing amounts after 2025, whether or not the budgetary effects of macroeconomic feedback are included.

Repealing the ACA also would affect the number of people with health insurance and their sources of coverage ... the number of non-elderly people who are uninsured would increase by about 19 million in 2016; by 22 million or 23 million in 2017, 2018, and 2019; and by about 24 million in all subsequent years through 2025.

In most of those years, the number of people with employment-based coverage would increase by about 8 million, and the number with coverage purchased individually or obtained through Medicaid would decrease by between 30 million and 32 million.

A few things to keep in mind when reading the following; GOP insurance plans include government subsidies, and a few of their plans roll back employer exemptions, which could see workplace coverage dropped:

How Would a Repeal Affect the Budget and the Economy Over the Next 10 Years? Repealing the ACA would increase deficits by $353 billion over the 2016–2025 period, excluding the budgetary impact of macroeconomic feedback.

An end to the ACA’s subsidies for health insurance coverage would generate gross savings for the government of $1,658 billion over the 2016–2025 period. Those savings would stem primarily from eliminating federal subsidies for insurance purchased through exchanges and from reducing outlays for Medicaid.

Those gross savings would be partially offset by the effects of eliminating several ACA provisions related to insurance coverage that are projected to reduce federal deficits.

In addition, increases in employment-based coverage stemming from a repeal would reduce revenues because most payments for that coverage are exempt from income and payroll taxes.

In sum, those effects of repealing the ACA would increase federal deficits by $502 billion over the 2016–2025 period, and the net savings from repealing the ACA’s coverage provisions would thus be $1,156 billion.

The net savings of $1 trillion results from doing away with the insurance subsidies, which Republicans said they would continue (but smaller) in their "plans." And most importantly, the figures here don't include the net savings from the ACA, just expenses:


The estimates discussed elsewhere in this report do not include any savings or costs associated with changes in discretionary spending.