Small government Ryan forced to take another government job that "he did not seek."

With Milwaukee Journal Sentinel columnist Craig Gilbert talking up Paul Ryan's House speaker position as "betting on his ability to "master" a uniquely challenging job...," like he mastered trickle down supply side economics I guess, we must once again rely on outside sources for an honest critique of our "wonkish" genius.

Remember his bullshit laced VP speech that pretty much exposed this half baked huckster? 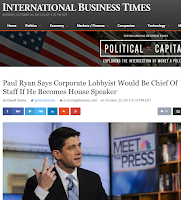 NY Daily News: Yes, Paul Ryan lied, and yes, it matters! His acceptance speech on Wednesday night was one of the most dishonest political speeches in recent U.S. political history. While some like Ben Smith at BuzzFeed call Ryan’s flights of factual fancy "policy differences" with President Obama, this misunderstands what actually is a policy difference and what is a lie – and why Ryan’s incessant lying ... is actually pretty important.

Now as House speaker, we're all supposed to feel good about Paul Ryan, all is forgiven?

Adding to Ryan's legend, and in keeping with the GOP's obsession of seeking government jobs they hate with a passion...


"He did not seek this office. The office sought him," said Cathy McMorris Rodgers, the chair of the House GOP conference, in nominating Ryan.

Ryan's a hero, forced to take a job he didn't want. That should instill confidence?

But seriously, according to Dean Baker, Co-director, CEPR and author of 'The End of Loser Liberalism: Making Markets Progressive', Ryan's budget "wonkism" is nothing but a media creation:

Unless reporters give Ryan a pop quiz, they really don't know what he knows about the budget, but they do know what he says. In addition to wanting to privatize both Social Security and Medicare, Ryan has indicated that he essentially wants to shut down the federal government in the sense of taking away all of the money for the non-military portion of the budget.

This is a fact that is easy to find for any reporter who could take a few minutes away from telling us what a great budget wonk the next speaker is. In 2011, when he chaired the House Budget Committee, Ryan directed the Congressional Budget Office to score his budget plans. The score of his plan showed the non-Social Security, non-Medicare portion of the federal budget shrinking to 3.5 percent of GDP by 2050 (page 16).

That's bad news for all Americans: 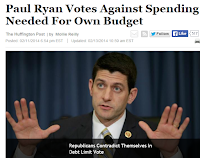 This number is roughly equal to current spending on the military ... he does not want to see the military budget cut ... That leaves no money for the Food and Drug Administration, the National Institutes of Health, The Justice Department, infrastructure spending or anything else. Following Ryan's plan, in 35 years we would have nothing left over after paying for the military.

Just to be clear, this was not some offhanded gaffe where Ryan might have misspoke. He supervised the CBO analysis. As the document makes clear, they consulted with Ryan in writing the analysis to make sure that they were accurately capturing his program.

So what percent of people in this country know that the next Speaker of the House would like to permanently shut down most of the government? My guess is almost no one; we just know he is a policy wonk. The budget wonkism of Chairman Ryan is a beautiful example of the failure of the national media to take their job seriously. Telling us he is a wonk, without telling us the content of his wonkism, is a bad joke which should get people very angry at the folks who pretend to give us the news.