Stand with Walker trolls are so in the tank for their authoritarian leader, that every misstep, job loss or draconian policy, is never as bad as the facts marking his failure. Or as they like to point out, not as bad as the misspelled words in my blog posts.

Scott Walker trolls suffer from a serious case of denial. It's a defensive mechanism really, since their own identities are so closely invested in their "leader." Without Walker's infallibility, their world view crumbles.

Walker trolls weren't dismayed by the news, or troubled by so many Wisconsinites losing their jobs, they were instead pissed someone dared to challenge the reality of Walker's jobs failure.

So they took to Twitter trying desperately to defend Walker's jobs losses, once again reaching 5 years back to blame Gov. Doyle. You're also not supposed to remember the Great Recession, the grand failure of free market deregulation: 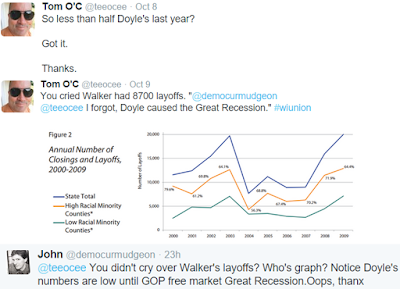 As you can see, I liked the graph so much that I asked for attribution. In conservative world, that's considered an attack so I could trash the source, when in fact, it was anything but...

Gotcha! I guess I walked right into my own meme. This happens daily and it's kind of amusing. I get the same reaction from my conservative friend in Milwaukee.

The graph not only disproves Tom O'C's and I make unions cry's point, but also shows us how much better Democratic Governor Jim Doyle's time in office was; He served as governor from 2003 to the end of 2010. Notice the jobs losses before Doyle took office. Troll tricksters (encouraged by Walker) want to blame the Republican/Bush Great Recession's job losses on Doyle, a ridiculous way to discredit the Democratic governor.

Here's the graph...sorry, the meme I stepped into:

Here's what the research is telling us (see below). Note: Republicans have done everything they can to attack Milwaukee; removing residency requirements and killing rail connectivity that would have revitalized regional business development in and around Milwaukee, extending to Chicago. All starting with Reagan:

The most recent data on layoffs in Wisconsin (through October, 2010) show clear clustering in the southeast corner of the state. Manufacturing has been historically concentrated in this area. The link between manufacturing and layoffs is consistent with deindustrialization that has accompanied national economic restructuring in favor of the service sector. Research has shown that deindustrialization has had a pronounced effect on the manufacturing industry since the 1980s. Racial minorities’ connection to the manufacturing industry increases their likelihood of being directly or indirectly affected by layoffs relative to non-Hispanic whites ... layoffs are not the only source of poverty. Additional structural factors emphasized throughout this series, including unemployment and underemployment, should be considered in combination with the results presented here.