Amazing. This from the Daily News: 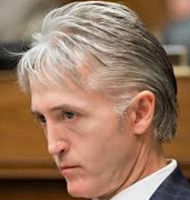 It now appears to be Trey Gowdy’s turn to come clean. He’s the republican congressman who is by default in charge of the Benghazi committee. And he just admitted to a game changer.

Gowdy and the republican Benghazi committee have been attacking by using a variety of government documents which have been heavily redacted to the point that it’s never been entirely clear just what context they would be in if not for all of the redactions and blackouts. After democrats asked the CIA to declassify the documents so that the public could see what was really being presented, the CIA responded by stating that it had never asked for anything to be redacted. When questioned under pressure, Gowdy admitted that he himself decided to redact large portions of the documents based on his own personal judgment of what information he did or didn’t want the public to know.


Bendery: "...the CIA said, 'oh no, that wasn't classified information,' and Trey Gowdy said 'yea well, we need to protect it, and he put it up on the committee website and outed the name of a CIA source...in the subject line."