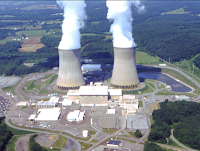 Republican lawmakers have introduced legislation that would end Wisconsin’s 32-year-old effective ban on the construction of new nuclear plants.

Dairyland Power Cooperative spokeswoman Deb Mirasola said regardless of any changes to state law, the company has no plans for a new nuclear generator. “Nuclear is not in our long-term resource plan,” she said. “Dairyland has made a conscientious effort to focus on renewable resources as we diversify.”

This is what they call moving “forward?” With over 3 long years left as governor, Walker may still make all of his dreams come true; remember this delayed Walker proposal?

Or this odd moment in GOP energy policy, now being brought back to life this week (many of these older links have gone dead, sorry):

Feb. 2013: Rep. Mark Honadel (R-South Milwaukee) said he plans to push again to lift the state's moratorium on construction of nuclear reactors. The timing for such a bill may not be right, given that the state is on the verge of losing Kewaunee.

Or this fumbled Republican lunacy even the utility groups couldn’t get behind:

Sen. Glenn Grothman has said he would introduce a bill to roll back the state's green power mandate, which requires the state to secure 10% of its electricity from renewable sources … utility representatives said a rollback wouldn't make sense, given the investments that power companies across the state already have made. The state's utilities are on track to comply with the renewable target in 2015.

Meanwhile, the cost of building new reactors - still banned under Wisconsin's nuclear moratorium - is so prohibitive that few utilities are undertaking the projects.

May 3, 2009: A wave of new reactors now in the works is intended to solve at least part of the nation’s energy problems … But cost is likely to plague every upcoming nuclear project.

That's okay, as long as it's not that Democratically supported green energy stuff that now costs a lot less.

And those older nuke plants?

According to AP, “estimates of dismantling costs have soared by more than $4.6 billion (for all plants) because rising energy and labor costs, while the investment funds that are supposed to pay for shutting plants down have lost $4.4 billion in the battered stock market. The amount of money set aside for dismantling the plants has decreased at nearly four of every five reactors. Radioactive waste could leak from abandoned plants into ground water or released into the air, and spent nuclear fuel rods could be stolen by terrorists. The average cost of dismantling a nuclear reactor is now estimated now at $450 million. The average plant owner has about $300 million saved up for the job. Typically, the money is raised through a small surcharge on electric rates."