September 11th triggered a weird reaction in the American psyche. The insatiable need to protect ourselves with guns.

But there's a new movement rising up...

Next August, Texans will be allowed to carry concealed weapons on public university campuses. In the wake of a spate of shootings on campus, a new group is planning a unique protest … planning to strap on sex toys in protest of the state’s new campus carry law, which goes into effect August 1, 2016.

Note: In Wisconsin Republicans have gone even further, with a bill called "Campus Carry," and it should make any parent sending their kid to the Badger state shudder; CC students will be able to carry a gun in class.

Apparently University of Texas students don't like the idea: 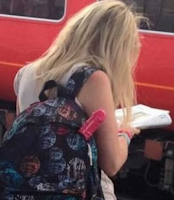 Facebook page, do little to quell Claudia Garate, 27, a graduate student at UT Austin’s fears about the law.

“The arguments that are pro-gun carrying...so many are centered around hate, misogyny, and racism. It’s a lot of hate from these people trying to defend this law, and that’s the scariest part. Because on one hand, they say they want to defend people and are obsessed with this idea of being a vigilante. [On the other], the young woman who organized this is receiving death threats.”

Indeed, the sex-toy brigade’s social media has been inundated with abuse. “I’m guessing that the organizer of this event is a huge slut. Should be funny to watch!” wrote Ron Cox, a Facebook commenter from Mississippi.

“I'm going to post all of your pictures on Facebook so your fathers can see how their daughters act at a liberal college,” a Texan named C.W. Cooper wrote.

“Skanks all of them,” a commenter named A.J. Hands wrote. “I think the guys should all walk around with rubber boobs on and crying everywhere, no problems with that huh ladies?”