Some people deserve privileges and some should work harder to earn them. That's Paul Ryan's message to Americans who want more family time, but still don't deserve it. Our ivory tower elitist career politician is now being called out as a hypocrite, since he's voted against a family leave act.

The initial reaction to Ryan's demand, that the House speaker be given more family time, was met with praise. And that's unfortunate, because that was exactly what Ryan wanted: 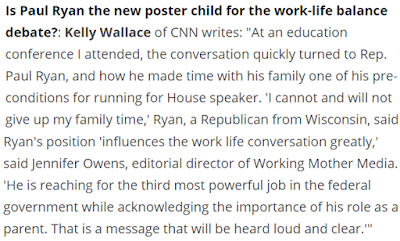 It wasn't long before his record on family leave for the American public leaked out. Ryan hypocritically doesn't believe Americans deserve what he deserves, time with their family, plain and simple:

Paul Ryan's request for family leave has critics crying hypocrite: Paul Ryan's request for family time as a condition for his campaign for House Speaker has drawn criticism from those who see the Wisconsin congressman's demands as hypocritical.  critics, including fellow politicians, have been quick to point out that it conflicts with his established opposition of paid family leave measures.

In 2009, Ryan voted against the Federal Employees Paid Parental Leave Act … Ryan has also delayed action on the proposed Family and Medical Insurance Leave Act. Ryan's congressional office was not among those listed in a January Huffington Post article as offering paid maternity or paternity leave for staffers.

Ryan may get what he wants...:


The House Freedom Caucus (HFC) stopped short of formally endorsing Rep. Paul Ryan for Speaker on Wednesday but said a “super-majority” of the group backs him, handing the Wisconsin Republican enough votes to win the top leadership post.

...but still not take the job, with this one "truly" major caveat:


Ryan told reporters, “If I can truly be a unifying figure, then I will gladly serve.”

The kicker to all this came in the form of a Tweet about advice from our hypocritical governor Scott Walker: