I once heard someone say about Scott Walker, "In one ear out his asshole." I'm beginning to understand why that makes sense now.

High Speed Rail/Rail/Regional Hub: When Walker killed high speed rail connecting Madison, Milwaukee, Kenosha, and Racine to Chicago, he also killed the idea of a regional Midwestern business hub that would have spurred on economic development and job creation for decades to come. Now all we can do is talk about it. BizTimes:

Racine Mayor John Dickert, challenged his colleagues to stop nitpicking at budgets and build a future for the next generation that will allow them to compete globally. “We have an opportunity to build a plan that crosses three states to create the most efficient, effective, transportation mechanism in the world and compete globally,” Dickert said.

Dickert spoke during a session on the “Future of North America’s largest transportation hub” at the third annual Summit on Regional Competitiveness Friday at the Federal Reserve Bank of Chicago. It has to do with connecting 21 counties in southeastern Wisconsin, Chicago and Indiana by road, rail, air, port and commuter rail. Right now, it’s just a concept, that the mayors of the communities are on board with but that gets stuck when it moves through the ranks of the state’s governors, state legislators and federal bureaucrats, Dickert said.

Walker traded all that to save less than a million dollars a year on train/track maintenance. Instead, he ended up spending $50 million to settle a lawsuit with Talgo for trains it built for the state. What, no conservative voter outrage over wasted taxpayer money? 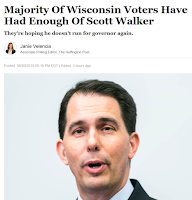 And yet, Walker talked up rail as if his rail fiasco never happened:


Walker noted there are at least 160 cities in China that have more than 1 million people, so compared to the world, major Midwestern cities including Chicago, Milwaukee and Gary, Ind., are small and need to bind together to make a global impact.

Fresh Water and the Great Lakes: With major cuts to the DNR that just approved the near doubling of an already large dairy farm in Kewaunee County where well water is already tainted by manure; and runoff into Green Bay that has created a huge dead zone algae blume, Scott Walker cluelessly talked up our lead in clean fresh water research: 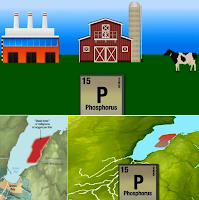 (Walker) said one of the great assets the region has is Lake Michigan and the tri-state area should continue to leverage the clean water natural resource that binds the region. “The water council has now elevated itself beyond Wisconsin,” Walker said. “Just in our state alone we have more than 300 companies related to water. China and India don’t have clean water. We have an abundance of it and we have experts in that intellectual property.”

So Walker isn't  worried, despite the facts:


Figures show farms produce 46% of phosphorus that flows into the lower Fox and Green Bay, followed by industry, 21%; municipal treatment plants, 16%; and urban storm water, 12%, according to estimates by NEW Water.

The Clean Water Act of 1972 largely exempts "nonpoint" sources such as the manure and fertilizer spread on fields and washed into streams.

So in Green Bay, officials are in the early stages of planning that would give financial incentives to farmers to use management practices, such as using more vegetation to cover fields to limit the runoff of manure and fertilizer.

Education, Skills Gap, and Jobs : After cutting nearly $500 million from the UW system since he became governor, and smoked other states in cuts to public education, Walker lamented the shortage of educated skilled people ready to fill the jobs employers say they need: