Republicans in congress said it was unfair Democrats rammed ObamaCare down everyone’s throats without a single Republican vote. Poor babies.

And yet, Republicans ramming Act 10 and now campaign finance down the throats of legislators voters who want to take money out of elections is okay? Who listens to the public anyway, when we have “leaders” who know what’s best, and "hold listening sessions so it gives the appearance the administration is reaching out." - Lobbyist Bill McCoshen.

Cap Times: Democrats in the Wisconsin Assembly (stood up and) recused themselves en masse from a Wednesday evening vote on a contentious GOP proposal to reshape the state's campaign finance laws. The bill passed shortly before 8 p.m. with the unanimous support of the chamber's Republican members, with no Democrats casting votes. Democrats cited state statute 19.46, which prevents public officials from "taking any official action substantially affecting a matter in which the official ... has a substantial financial interest."

"Because the bill has a direct financial interest for myself ... I feel it is necessary to recuse myself given the direct self-interest that this bill provides for members of this body," said Rep. Cory Mason, D-Racine, leading the arguments.


“If we do something wrong, we should be investigated,” added Sen. John Erpenbach (D-Middleton), his voice rising with emotion. “I don’t want any part of this bill. People are cynical enough already. Let’s not give them another reason to hate politicians.” 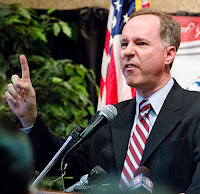 Vos accused Democrats of setting a "seriously dangerous precedent" by recusing themselves, noting legislators could make the same argument for voting on the state budget or issues that affect their hometown.

"I have never been so disappointed in the members of the minority." Vos said Democrats took their leadership's cue to "walk off a cliff" and called their actions "silly in the extreme."

Yes, it's  those power hungry Democrats who are being extreme in all this.

And Rep. Joel Kleefisch, a man who resently transformed from legislator to neanderthal, observed:

He was saddened to see Democrats engage in a "stunt."

Going back to the future on campaign finance is also the Republicans idea of being more "progressive" than Democrats. Ouch:

Rep. Adam Neylon, R-Pewaukee: "...stop the theatrics ... we will operate under the current existing state law throughout history forever. Is that what you want? Because that doesn't sound very progressive to me."