Shocker!!! Democrats fight Campus Carry with No Guns on Campus bill. Mass shootings not about mental health, it's about Anger.

This is what I think every Democratic voter has been waiting for for years, taking it to Republicans, putting on an offensive that clearly defines where their party stands. 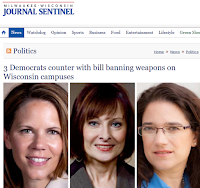 There is a clear choice. As a parent with a son heading off to Madison in a couple of years, there's no way I want him in a class filled with firearms...even one. Because it's not really about mental illness. Wouldn't you know it, Republicans have us chasing down another rabbit hole to nowhere.

The real problem is out of control anger, or "Intermittent explosive disorder" (IED).

That's why Democratic legislators are pushing to reinstate the 48 hour cooling off period.  WISC/WKOW:

Families of victims of gun violence argued that repealing the waiting period should not have been about the time it takes to do a background check, which is what Republican authors argued earlier in the year. The groups said a "cooling-off period" was needed, especially in cases of suicide.

Violence is not a product of mental illness. Nor is violence generally the action of ordinary, stable individuals who suddenly “break” and commit crimes of passion. Violent crimes are committed by violent people, those who do not have the skills to manage their anger. Most homicides are committed by people with a history of violence. Murderers are rarely ordinary, law-abiding citizens, and they are also rarely mentally ill. Violence is a product of compromised anger management skills.

In a summary of studies on murder and prior record of violence, Don Kates and Gary Mauser found that 80 to 90 percent of murderers had prior police records, in contrast to 15 percent of American adults overall. In a study of domestic murderers, 46 percent of the perpetrators had had a restraining order against them at some time. Family murders are preceded by prior domestic violence more than 90 percent of the time. Violent crimes are committed by people who lack the skills to modulate anger, express it constructively, and move beyond it.

The one relevant diagnosis is intermittent explosive disorder, a disorder of anger management. Violent crimes committed by people with severe mental illnesses get a lot of attention, but such attacks are relatively rare. Paolo del Vecchio of the federal Substance Abuse and Mental Health Services Administration has said, “Violence by those with mental illness is so small that even if you could somehow cure it all, 95 percent of violent crime would still exist” ... with significant encouragement from the gun lobby, the public has begun to seize on the wrong explanation for tragic, violent events. They focus not on the IED-diagnosed patients but on those with other diagnoses, schizophrenia in particular, ignoring the fact that what the perpetrators have in common in every single one of these cases is a loss of control of their anger. No effort is being made to address the much broader cultural problem of anger management. This broader problem encompasses not just mass murders but violence toward children and spouses, rape, road rage, assault, and violent robberies. We are a culture awash in anger. Uncontrolled anger has become our No. 1 mental health issue. We have sought scapegoats in minority cultures, racial groups, and now the mentally ill.

"college campus dangerous weapon ban" bill is similar to laws in 9 other states. While Republicans have taken the hopeless position that "there's nothing anybody can do, good luck," Democrats are trying to solve a problem no other industrialized country has. jsonline:

(It's) in response to one proposed earlier this week by Rep. Jesse Kremer (R-Kewaskum) says current law is not stopping those who want to cause mayhem from doing so on and around campus.

The co-sponsorship memo the three Democrats sent to lawmakers Wednesday referred to a recent Stanford study that concluded more guns lead to higher rates of aggravated assault, robbery, rape and murder. Having a firearm present in a domestic violence situation also increases a woman's risk of dying by homicide by 500%, the memo said.