The GOP's mind-numbing tantrum over the CNBC debate that dissented into onstage bickering and wise-asses pot shots has gone nuclear.

Like everything else the Republicans touch and destroy, it's always somebody else's fault. They're already blaming their onstage cat fight criticisms of each other on the moderators, so why not everything else?

Threaten the media's economic interest: Our great defenders of "free speech" and the 1st Amendment are firing a shot over the bow at CNBC,  threatening the networks bottom line if they don't fall in line, back off away from controversy, ask easy questions and don't challenge the candidates. After all, who gave the Fourth Estate the idea the Bill of Rights applied to them...oh, wait it does: "prohibit... infringing on the freedom of the press." Who cares...

...we already know our authoritarian dictatorial party owns that document too: 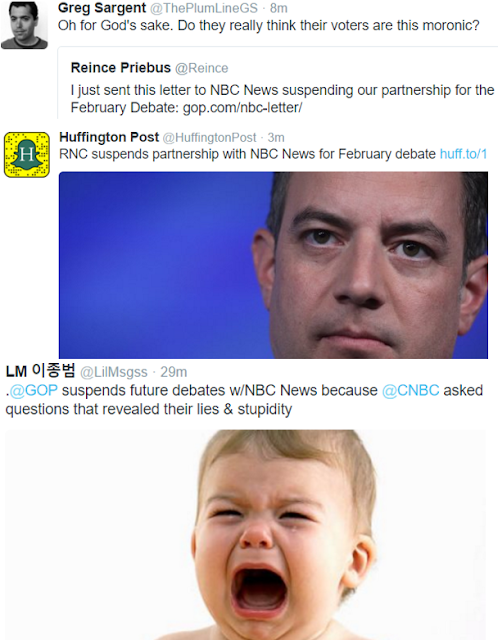 Change the rules if they make you look bad: How long before Americans have had enough of this almost despotic party behavior? I mean it is pretty obvious.

We just saw this in Wisconsin. As I recently blogged:


All of Scott Walker's legal problems wiped away!!! Coincidence? Think about it for a second:

1. Are we really supposed to believe that Scott Walker wasn't behind the elimination of the John Doe investigations after they nearly jailed him? Coincidence?

2. Are we really supposed to believe that Scott Walker wasn't behind the legalization of campaign coordination with issue advocacy groups after he was caught doing just that, illegally? Coincidence?

3. Did he fail only for the moment to do away with out open records laws for the same reasons he's given for withholding open records requests? Coincidence?

The Democratic candidates didn't seem to have the same problem, but then, they were supposedly lobbed softballs all night by the fawning media. Another often repeated myth. Like I said, why not have opposition debate moderators firing off questions to the candidates that are tough and test their ability to think on their feet?

Change in the Rules Bizarre: Just before the RNC's Reince Priebus made the announcement, the candidates decided to get together. The scariest candidate, Ben Carson, described their ridiculous plan. MSNBC: