Walker's Mickey Mouse Lie only Hitler would sign onto.

Just like my conservative friend in Milwaukee who's always sending me videos and news stories form right wing sites, Scott Walker and his band of Republican pirates that have taken command of the state Capitol are shaping actual governmental policy based on the fictions and fabrications created by these propagandists.

One of the worst, the MacIver Institute, is about to help take down the nations election oversight model, the Government Accountability Board.

PolitiFact even featured it for grins: 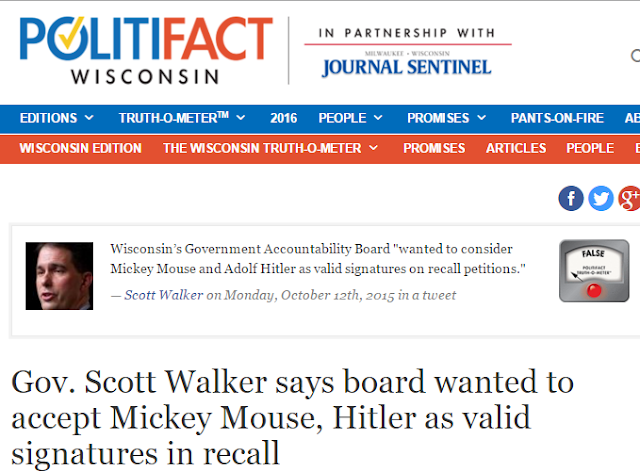 Never mind that the idea of something like this ever happening is crazy, Republicans and in-the-tank voters tend to believe without question the more sensational "attacks." Say it enough, and it must be true...but still isn't:

On Dec. 18, 2011, we looked at this claim from MacIver’s video: "Wisconsin election officials to accept Mickey Mouse, Hitler signatures" on recall petitions. We rated itMostly False.

The claim stems from a comment made by GAB elections specialist David Buerger during a Dec. 13, 2011 meeting of the board. Buerger was asked about Mickey Mouse and Hitler and responded: "We will flag them, but we will not strike them without challenge."

The MacIver video said the board decided to "accept" the fictitious signatures, as in counting them toward the total of about 540,000 that was required to force a recall election. That was not the case. Indeed, Buerger noted explicitly they would be "flagged" for more review, just not automatically stricken.


But there’s no evidence to support that. The process would not have immediately struck them. Rather, it would have flagged them for review. And there were numerous layers of scrutiny before it would have been determined valid.

Walker took a Mostly False statement and embellished it.

We rate his claim False.

Letting "partisan behavior to run rampant," here's ALEC member and State Sen. Leah Vukmir play up this complete fiction. For anybody else, this would normally be really embarrassing stuff: