The nation is getting to see the real Scott Walker. His neatly managed media friends and overly rehearsed memorized talking points that played so well in the state, are now playing second fiddle to Walker's massive ego trip into presidential politics.

While low information voters don't hear the dictatorial authoritarian leanings spilling out of Walker's mouth daily, others have found it to be a gold mine for humorous parody. One of the most surprising came from the conservative Journal Sentinel editorial board the other day. You can read that below the cartoon here, that may have hit a little too close to home when it comes to Walker's foreign policy thinking: 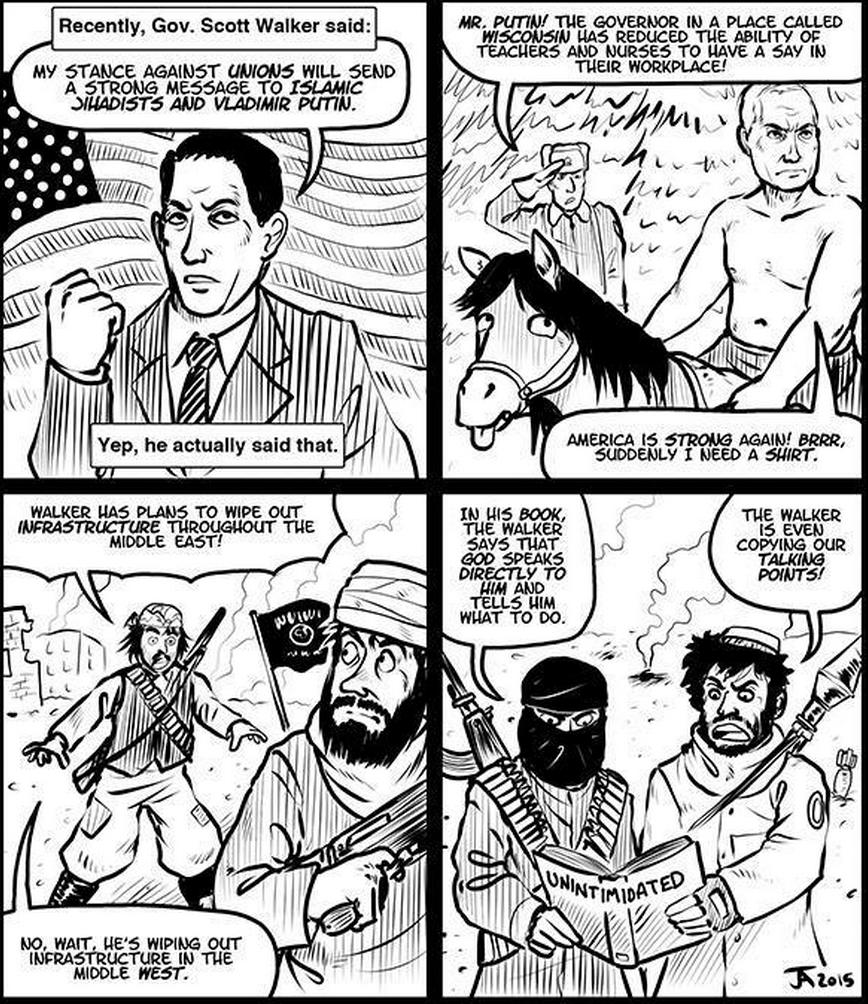 I was going to offer up an excerpt of the Journal Sentinel's David Haynes piece, but was all too good to pass up:

I already feel safer knowing that Gov. Scott Walker might soon be in charge of tracking down ISIS. As the governor bragged Thursday to the Conservative Political Action Conference: "I want a commander-in-chief who will do everything in their power to ensure that the threats from radical Islamic terrorists do not wash up on American soil. We need a leader with that kind of confidence. If I can take on 100,000 protesters, I can do the same across the world."

Indeed. The governor has all but conquered a host of Wisconsin acronyms — AFSCME, WEAC, IBEW, UAW and MTEA. Why not ISIS?

And he won't have to concern himself with loud protesters — not over there. No First Amendment. No free speech. No right to assemble. Walker's experience in Wisconsin is more transferrable to the world stage than it might at first appear. As the governor has shown, if you want to defeat an enemy, you must first...Take away his right to collectively bargain.

Walker has stood against Big Government in Wisconsin, a quality that plays well in the fight against ISIS. The citizens of the Islamic State have gotten used to the absence of services and a safety net; they'll certainly never miss a high-speed train or a federal match for Medicaid.

As he regains territory lost to the Islamic State group, Walker can cut property taxes, offer generous tax credits for political supporters and "return tax dollars to the hardworking people" of Syria and Iraq.

We may be about to learn if supply side economics works when there is no supply.

Walker also can apply the clever ministrations of "divide and conquer" — a political strategy as old as the cradle of civilization itself. In Wisconsin, Walker targeted most public employee unions during the Act 10 fight four years ago but left alone the unions that supported him.

In the Levant, he could cut deals with other terrorist groups — let them keep their Cadillac health care benefits as long as they donate to the Wisconsin Club for Growth and back the efforts of Wisconsin Manufacturers & Commerce to open the region to mining. (If the neocons had been a bit more clever, they would have nixed George W. Bush's disastrous Iraq plan 12 years ago and put the Wisconsin Club for Growth or WMC in charge. No laws against a campaign coordinating with an outside group over there. And no one has ever heard of "John Doe.")

Other Walker initiatives could be cut-and-pasted from Badgerland to ISIS-controlled territories: Once in charge, Walker could impress the importance of one person, one vote. No more purple fingers. State-issued IDs for all. And no voting on weekends.

Of course, some Walker-like initiatives already are in place in areas controlled by the Islamic State. Concealed carry, for example, the "castle doctrine" and big cuts in aid to local schools, governments and universities.

But I'll bet they've never thought of offering voucher schools for all, or asking the few remaining, cowering professors to "teach one more class."

So look out, ISIS, Scott Walker is coming for you. And he's bringing his own version of The Wisconsin Idea. 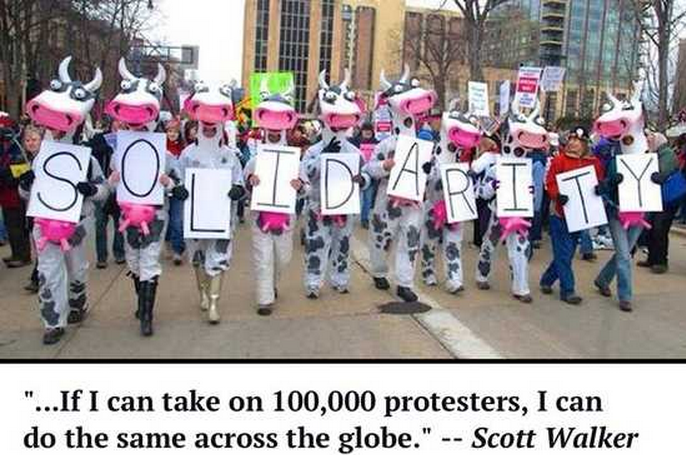