Obama's Presidency is Over?

I was kind of waiting for this day to arrive, and it officially has via this MSNBC announcement from Chuck Todd: 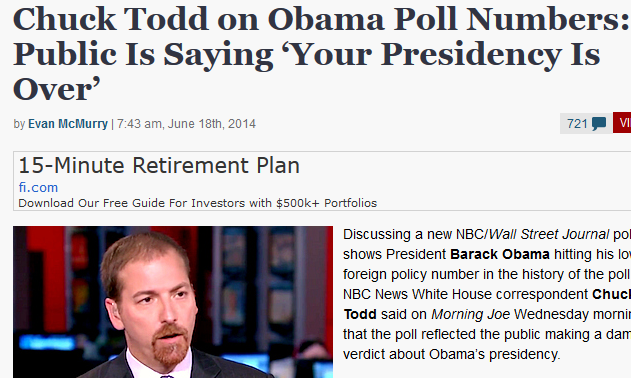 My conservative friend in Milwaukee took a break from Benghazi and Obama's IRS scandal to tell me, "see, I told you so." Chuck Todd's opinion centered on just one poll. But to me, it proved how one party can win the public over with a massive unrelenting campaign to discredit anyone it chooses. In this case it was Obama. But this tactic can be used on anyone not looked on favorably by the political authority in charge.


I’m doing a quick story on this. What it really says to me: The tactic of one party to fully trash relentlessly everything a president does, with lies, fabrications, fictions and conspiracy theories, works. I never thought it was possible to align everyone in a party to think and say the same thing over and over whether it was true or not...but it is.

Congratulations, it must feel great being on the “winning” side (according to Todd anyway). All this time you have been obsessed with “winning” in our conversations, at any cost. Yes, the great Chuck Todd is now the voice of reason and not just a part of the liberal cabal at MSNBC. Flip flop?

And your plan for the new government and constitutional convention after you throw out the old one? Maybe we can make the government more like you, or maybe like someone else you don’t agree with all. See how much say you’ll have when they draw that up.

Besides losing on their push for a war with Russia and staying in an endless war in Afghanistan, the GOP campaign proved they could put the country on a firm war footing and leave prisoners of war behind if they so choose to in the future under a Republican controlled government:


According to the poll, 44% of respondents said the administration should not have made the exchange, compared with 30% who supported it.

When asked their predictions on the rest of Obama's term in office, 54% said they thought he "cannot lead and get the job done," compared with only 42% who said the opposite.

Over the last 12 months, 41% of respondents said their views of the Obama administration have "gotten worse."

But there was good news here:

On the generic congressional ballot, 35% said they would vote for a Democratic candidate in their district, compared with 30% who chose a theoretical Republican candidate.