The groups that successfully halted, for the time being, the John Doe 2 investigation are now suffering the unintended consequences of their own legal brilliance.

And prosecutors are now legally able to make their case to the public. They dropped the bomb, so to speak. What turn: 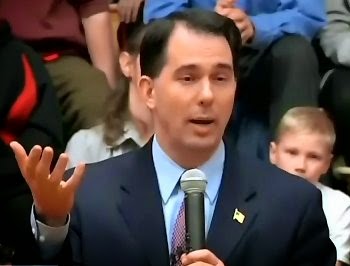 jsonline: Prosecutors allege that Gov. Scott Walker was at the center of an effort to illegally coordinate fundraising among conservative groups to help his campaign and those of Republican senators fend off recall elections during 2011 and '12, according to documents unsealed Thursday. In the documents, prosecutors lay out what they call a "criminal scheme" to bypass state election laws by Walker, his campaign and two top deputies — R.J. Johnson and Deborah Jordahl.

The governor and his close confidants helped raise money and control spending through 12 conservative groups during the recall elections, according to the prosecutors' filings. The documents include an email in which Walker tells Karl Rove, former top adviser to President George W. Bush, that Johnson would lead the coordination campaign. Johnson is also chief adviser to Wisconsin Club for Growth, a conservative group active in the recall elections.

"Bottom-line: R.J. helps keep in place a team that is wildly successful in Wisconsin. We are running 9 recall elections and it will be like 9 congressional markets in every market in the state (and Twin Cities)," Walker wrote to Rove on May 4, 2011.

Today was a bad day for Republican governors. Out in Wisconsin, the long-simmering investigation into Gov. Scott Walker’s 2012 recall campaign boiled over as prosecutors unsealed documents laying out what they say was Walker’s central role in a “criminal scheme” to illegally coordinate with outside groups. And in New Jersey, reports are that investigators picking apart the almost comedic corruption of Gov. Chris Christie’s administration have several of the governor’s top aides dead-to-rights and are closing in on Christie himself.

For pro-union forces out there, seeing Walker and Christie in the hot seat has to engender more than a little Schadenfreude.

Walker’s successful push to strip state government workers of their collective bargaining rights was what led to the recall election in the first place. Christie’s national profile was first built on his public shouting matches with members of the New Jersey teachers union.