A nice series on the failure of conservative free market economics hit all the right marks with one example after the next. Check out part one of the series here, at Populist Daily.com. I especially liked the following quote, which I framed for downloading. It was THE defining moment: 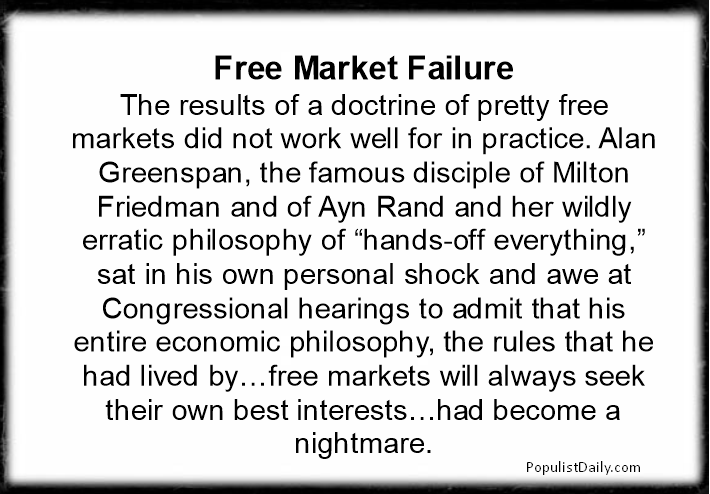 Proof? Here's the video I edited together with the reckless comments of Gov. and Presidential candidate Rich Perry:


Since Ronald Reagan, two serious economic crises, one of which was and is devastating to our society and possibly our future. One very damaging unnecessary war (not only for us but for innocent citizens of Iraq…and we wonder why Arabs hate us), tax cuts primarily for the wealthiest Americans that have dropped our annual revenues to approximately 15% of GDP from 20% under Clinton and Carter, causing massive deficits and a national debt of $16 trillion.

So we know what to expect from Conservatism. Promises of gold in the hills, promises that tax cuts will create a more vibrant economy, promises that all will be well, until…things don’t work out. And now what is their solution, those Conservatives working for huge corporations and billionaires…the Conservative solution is to blame the average person for wanting the “entitlements” we all paid for over 40 years or more of a working life. Conservatives want to cut Social Security and Medicare.