We Can Thank Right Wing Media and Politicians for Domestic Terrorist Attack in Vegas.

Domestic terrorism…get used to the term, we’re going to be using often. And the radical right wing media, Fox News and in conservative talk radio, keep pushing their anti-government message to frenzied believers. They are to blame. They will of course deny the obvious, but we're smarter than that. Remember, since the sixties protests and bombings have been blamed on the ideas people get from liberal schools and colleges. So why aren't these blatant cases of domestic terrorism the offshoot of conservative media?

If individuals or groups declare it's a revolution and try to overthrow of our government by killing people, what would you call it? We know what John Boehner's not going to call it:

TPM: Speaker John Boehner was asked if he considers the Las Vegas shootings on Sunday to be "an act of domestic terrorism."

"I -- I'm not sure how I'd describe it," he responded. "But clearly we had a couple of sick individuals who engaged in a horrific crime.”

The Las Vegas shooting was plainly encouraged by Fox News' Sean Hannity, who made tax deadbeat Cliven Bundy a hero. Racist killer Jerad Miller was one of the armed militia that turned out at the ranch: 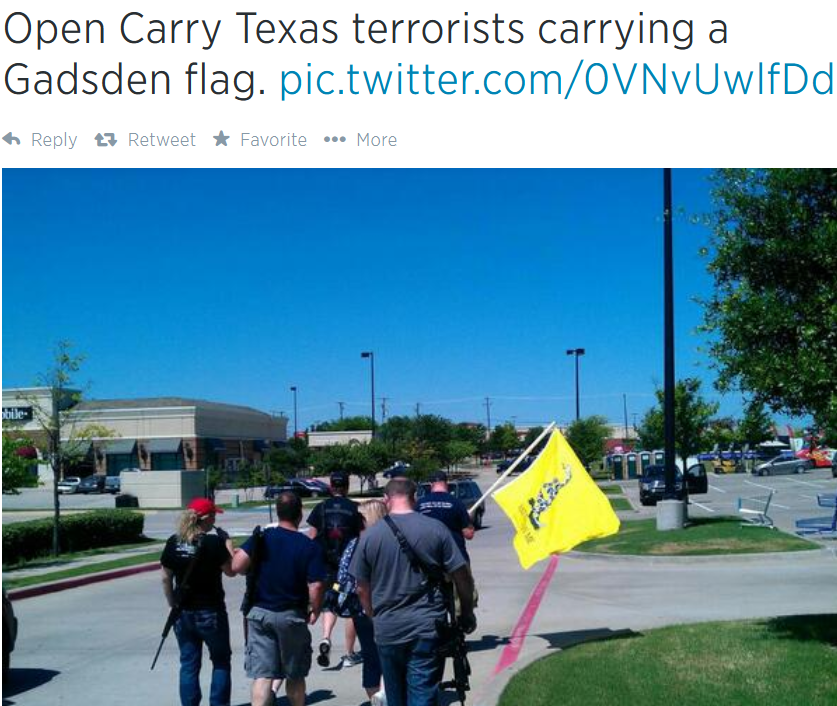 Neighbors of the couple who ambushed two police officers Sunday in Las Vegas told local newspapers the pair had bragged about spending time at Cliven Bundy’s ranch during the standoff with the federal government earlier this year. Neighbors in an apartment complex where the two suspects lived said they “had a reputation for spouting racist, anti-government views” and boasted about their gun collection, according to the Las Vegas Sun. "They were handing out white-power propaganda and were talking about doing the next Columbine," he said.

Fox News: The attack at a CiCi's Pizza restaurant on Sunday killed Officers Alyn Beck, 41, and Igor Soldo, 31, who are both husbands and fathers. One of the shooters yelled, "This is a revolution!" The Review-Journal reported that the pair covered the officers with a cloth that featured the Gadsden flag, which features a coiled snake with the words "Don't Tread on Me."