No public input and no concerns whatsoever over possible oil spills? It’s heaven living in such a perfect state.

The DNR decide it didn’t need have to listen to us:

jsonline: The public was "completely cut out of the process" when the DNR decided not to conduct a complete environmental review, and instead considered only an air permit.

What’s so unsettling about the DNR’s okay to triple the capacity of tar sand crude through Wisconsin is a law that doesn’t consider past environmental problems by the Enbridge Energy. 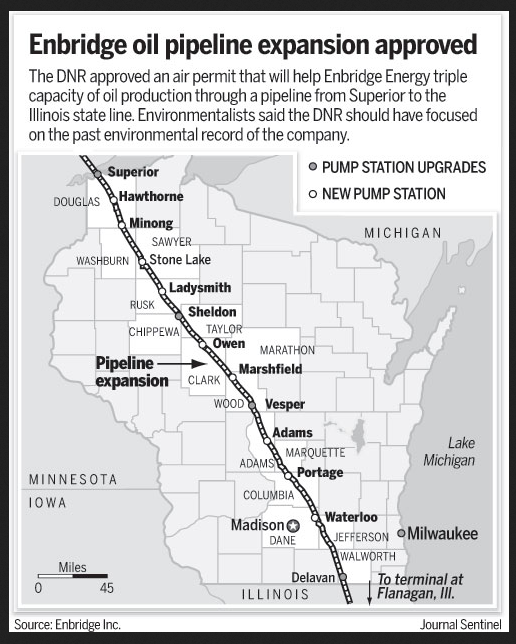 The increase would send more oil from Canada and North Dakota across Wisconsin than the proposed Keystone XL pipeline linking western Canada to the Gulf Coast. In July 2010, an Enbridge line ruptured in Michigan, sending 834,000 barrels of oil into the Kalamazoo River. The company also paid $1.1 million to settle claims by the Wisconsin DNR and the state Department of Justice that the company violated environmental laws during the initial phase of the pipeline project in 2007 and 2008. DNR officials also said state law doesn't allow officials to use a company's past operating record when reviewing environmental permits.

What a nice convenient law. Do people get these same legal benefits as companies?