I think it’s sad commentary that Fox News is supposedly the most trusted network for news. Anyone with a nose for news knows that’s completely absurd, but you’ll never convince the echo chamber of bobbleheads. 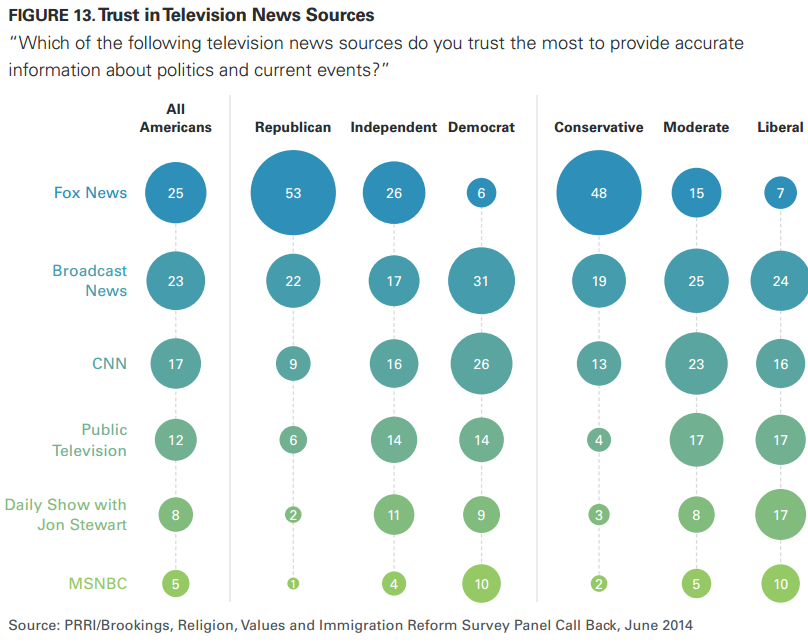 What it really says is this; a campaign driven by a massive network of conservative radio talkers, coupled with the tabloid delivery of clueless male anchors and panicky pretty blond faces, works like magic. Conservative media knows how to tap into a very receptive paranoid public. Fear, envy and breathlessly delivered propaganda is a time tested historical winner.

A recent Tweet alerted me to the latest churning's on the far right; Fox News is the most trusted network, and MSNBC/Daily Show are the least trusted. An absurd but logical result of right wing media dominance.

But there’s a flip side and a not so startling reason for this not so shocking survey result: The Brookings survey receiving so much conservative attention also shows how misinformed these Fox News heads are. They trust a lot of very inaccurate information. That’s a big drawback, right?

More importantly, it turns out Democrats aren't putting all their trust into just one network like Fox News viewers, instead they're spreading their trust out to 4 or 5 different networks,  which ends up lowering MSNBC’s trust numbers. That’s true for both a January PPP poll and the new Brookings survey. Here's sample I know this blogs trolls are not going to believe:

And the right wing hates MSNBC so much that it also skews the numbers downward more so than disinterested liberals:


PPP's 5th annual poll (Jan. 2014) about trust in TV news continues to find what it does every year: Fox News is both the most trusted and least trusted name in news. It leads the way because of its continuing near total support among Republicans as the place to go for news- 69% of Republicans say it's their most trusted source with nothing else polling above 7%. Meanwhile Democrats are split between a lot of different outlets when it comes to who they have the most faith in- PBS at 21%, CNN and ABC at 18%, and CBS and MSNBC at 12% all poll in double digits. Fox News also leads the 'least trusted' list in our annual poll. 33% give it that designation to 19% for MSNBC, 14% for Comedy Central.

WARNING: Democrats risk losing it all if they continue to sit out midterm elections, when tea party Republicans are most ginned up to vote. It's a politically deadly trend:


Republican voters are much more likely than Democratic voters to report that they will vote this year (78% vs. 57%). Among Tea Party voters, 86% say they will definitely vote.