Crazy Cruz compares taking money out of elections with Banning Books. Yea, that's what Democrats want to do...

Many were right when they first compared Sen. Ted Cruz to Joseph McCarthy. He even looks like the guy.

While the public overwhelmingly wants to take money out of our elections, politicians like Cruz want to take us in the opposite direction. Does an inanimate object like money have a First Amendment right to free speech? It's crazy.

But even worse: Is this tweet one of the most irresponsible and loathsome attempts at fear mongering yet by a sitting senator? 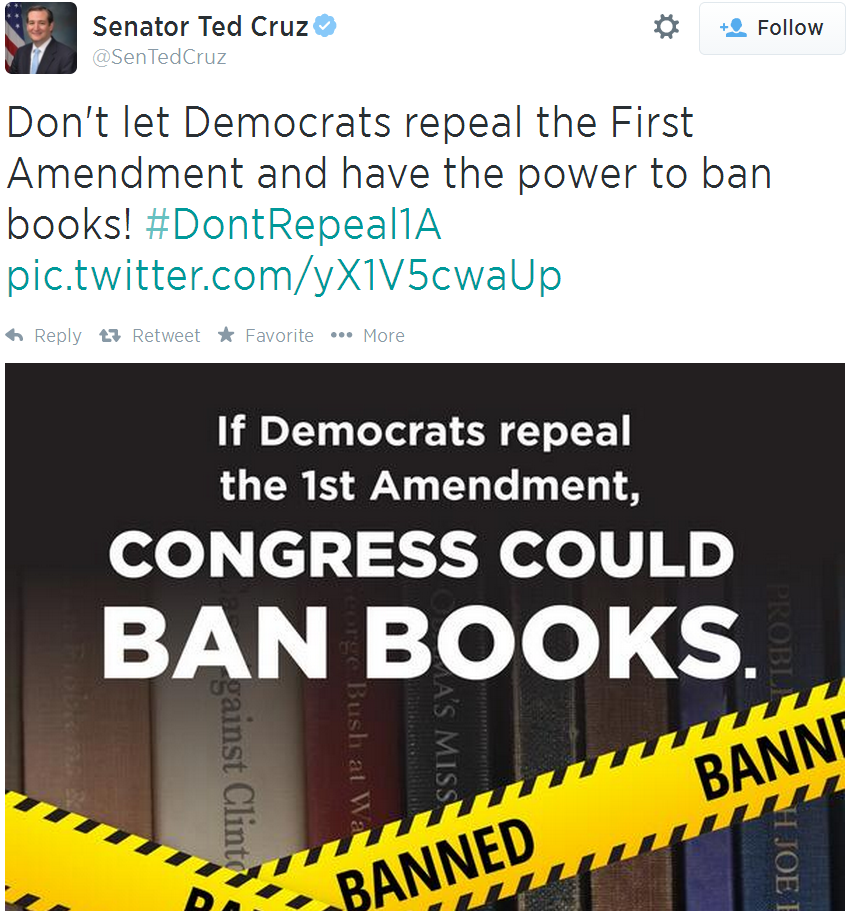 The activist conservative Supreme Court completely messed up the context of the First Amendment. Chris Hayes explores that belief:

But the current wave of amendments do have their problems:


MSNBC: Rick Hasen, a law professor at the University of California-Irvine, of the proposals being considered … As Hasen detailed in a paper from last October, an amendment proposed by Democratic Sens. Jon Tester of Montana and Patrick Murphy of Pennsylvania would limit constitutional rights to “natural persons,” and which could have the inadvertent impact of allowing the State of New York to bar publication of The New York Times.

Another proposal, from New Mexico Democratic Sen. Tom Udall, which Hasen described as “marginally better,” would create an exception for the press – which would be confusing, given that the line between who is and is not a journalist continues to blur as technology disrupts the media industry.

Jamie Raskin, a Democratic state legislator from Maryland and law professor at American University said, “Look at the political realm they want to give to the American people: Corporations are treated like people, they can give on an unlimited basis directly to candidates, they can spend on an unlimited basis and they don’t have to tell anybody. Then they whine if anybody even calls a corporation out for doing it, saying that somehow their First Amendment rights have been violated. That’s a pretty special First Amendment they’ve got.”

There’s a universe of reasonable campaign finance restrictions between legalized bribery and establishing a Ministry of Truth, but none of them are likely to pass anytime soon. More effective limits on money in politics however, may have to wait for a Supreme Court friendlier to campaign finance reform.